Fro-Yo Wars, Part I: North Beach Does Not Want Yogurt

Share All sharing options for: Fro-Yo Wars, Part I: North Beach Does Not Want Yogurt

The Honeydoo storefront on Grant and Green: both incredible and new.

As you may or not be aware, the frozen yogurt wars (late of Los Angeles and New York) have landed upon our fair city. In LA alone, you've got Pinkberry, Red Mango, Red Cantaloupe, Kiwiberry, Cactusberry, Iceberry, Berri Good and a host of other knockoffs all competing for a scoop of tangy yogurt dominance. Here in San Francisco, Yogurt Bar fired the first shots, setting up shop right off of on Cow Hollow's Union Street. In a seemingly perfect neighborhood [read: trendy and full of dieters], Yogurt Bar has disappointed the yogurt craving masses. In fact, "Yucky!" is a direct quote.

Ah, but reinforcements are on the way ... perhaps.

Perched on the northeast corner of North Beach's Grant and Green lies Honeydoo, pictured above. The corner space has been plywooded up for months, far surpassing the anticipated opening date of late summer. However, it seems that San Francisco's fro-yo war participant may have hit a major snag: the local North Beach community. This weekend, the following poster was displayed prominently on the storefront: 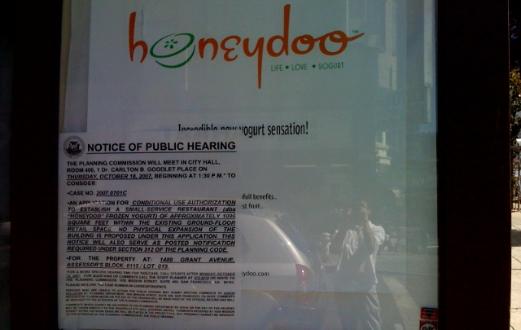 The Honeydoo storefront this weekend.

According to the poster, the Board of Supervisors will convene on October 18 at 1:30pm to determine the fate of Honeydoo. The text reads:

An application for conditional use authorization to establish a small-service restaurant (dba "Honeydoo" Frozen Yogurt") of approximately 1096 square feet within the existing ground floor retail space. No physical expansion of the building is proposed under this application. This notice will also service as posted notification required under section 312 of the planning code.

Did Honeydoo just fail to get its paperwork together or is there more to this story? Unlike, say the Marina, North Beach is a notoriously difficult place for new stores—especially chains—to open. Could we have a Richmond-Starbucks situation brewing, where a local community successfully blocks a new business because it's not wanted?
· Eater LA Frozen Yogurt War Archives/Obsession [~ELA~]
· Pinkberry Rising: A Primer [~E~]