Share All sharing options for: Week in Reviews: Spruce, So Hot Right Now

This Wednesday's edition of Week in Reviews brings us the first big media review of the city's newest restaurant star, Spruce. SF Weekly's Meredith Brody does the inaugural honors of what may be a litany of shiny reviews. Meanwhile, Michael Bauer preps for his Sunday Spruce review by upgrading Bong Su to 2.5 stars. And beyond that, you know we've got reviews from the Bay Guardian, the blogosphere and elsewhere. The Week in Reviews kicks off now. 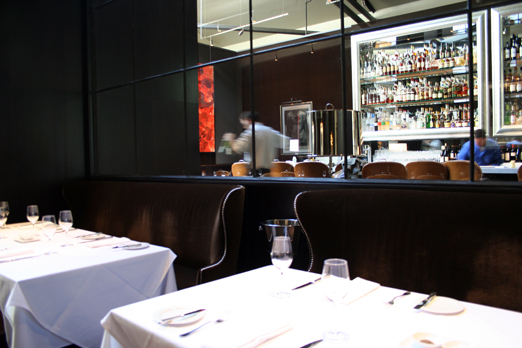 1) And so it begins. Meredith Brody rings in Spruce with predictable laudatory pomp and circumstance. Nearly everything from the space to the food hits all the right notes, the only exception being a bit of charred bread. Still, there's no denying Spruce has quickly made Laurel Heights a dining destination, but, in a twist for San Franciscans, it's nearly impossible to get a table:

And apparently Spruce has been besieged since its opening — for the first time in many years when I called for a dinner reservation a week in advance, I was offered only 5 or 9 p.m. Unlike the similar refrain heard almost reflexively in New York, it didn't feel like a ploy. I was cheerfully told that their dinners were almost fully booked a month in advance, but if a time more to my liking opened up, they'd call me back.

So, yes, Spruce is a difficult nut to crack for the time being. They're pretty much booked for the next month solid (dinner-wise), and with the deluge of gushing reviews poised for the next several weeks, that resy will almost assuredly remain trying. But hey, you could always try the French Laundry. [SF Weekly]


2) Michael Bauer returns to Bong Su, the stylish Vietnamese restaurant/lounge to which he doled out an unenthusiastic two-stars a year ago. Back in the initial review, "cloying" sweetness dominated the fare, but a year later, Bong Su's improvements are enough to warrant a slight upgrade:

A recent return visit showed a somewhat revamped menu and better balanced preparations than I had encountered on the initial review. Many dishes still emphasize the sweetness, and I wish some of the other sour and spicy components were stronger, but overall the food was better and the service continued to be caring and efficient.

Also, pastry chef Matthew Mina has the balls to serve durian on his dessert menu, and that gall is worth a visit in itself. [Chron]

In blogland, the Bunrab folks are at Slow Club, Nua gets a thumbs down from A Few Reservations, and rounding out the group, we've got Bay Area Bites indulging in some Bay Area small bites at Ducca (and elsewhere).