Share All sharing options for: The Dish: Another Afghan, Fish & Farm Confirmed

The City welcomes a veritable deluge of restaurant openings every fall, but when said restaurants actually open is anyone's guess. The Dish is delighted to bring you the latest in debuts. 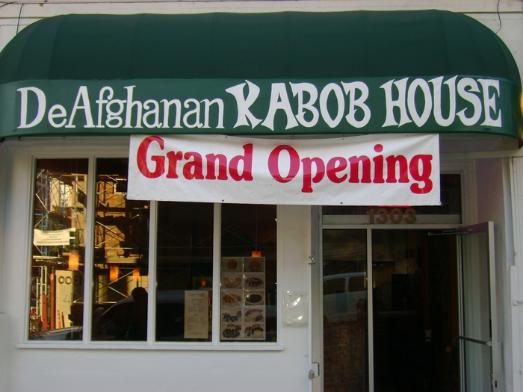 Why yes, we would describe this opening as grand. [Photo: Yelp/jay f]

1) De Afghanan Kabob House: Another joint has joined the newly-reopened Helmand Palace in the Afghan cuisine club. De Afghanan Kabob House is the new tenant in the onetime Mediterranean Spirit spot on Polk Street: "...it's straight Afghan and straight kebobs. You order at the counter, sit down, and they bring you your food. Bring your own beer." 1303 Polk St, Between Austin St & Bush St, Nob Hill, (415) 345-9947 [TH, Yelp]

2) Fish & Farm: Despite some contradictory reports about the interwebs, Fish & Farm opens for business tonight. They slightly upgraded their official site this morning, and vigilant readers who check out the menu will notice an admirable local-food policy (all produce sourced from within 100 miles, etc), as well as an unbelievable corkage deal: "Corkage is $5 per 750 ml bottle California wine, All others $10—waived with a 750 ml. bottle purchase." 339 Taylor Street, Between Ellis St & O'Farrell St, Union Square/Tenderloin, (415) 474-3474 [EaterWire, Chowhound]