Share All sharing options for: Disgruntled Workers Cause Ruckus at Tres Agaves

Anyone who passed within a three-block radius of 130 Townsend Street yesterday evening heard the bedlam that was Tres Agaves last night. A dozen or so workers (activist friends of workers?) gathered outside of Joseph Manzare's Mexican restaurant, chanting—with loud speaker in hand, mind you—"Pay your workers, Tres Agaves!" Along with the megaphone, a medley of bells and other assorted noisemakers created quite the scene.

Manzare (also of Globe, Pescheria and Zuppa) is one of the more beloved restaurateurs in town, so we'll reserve judgment until more facts come out, but apparently, Tres Agaves workers hold many a complaint about their working conditions. In addition to the protest, they say they have filed official complaints with the city. But what exactly is the nature of the complaints? And what about the poor folks eating amidst the chaos? 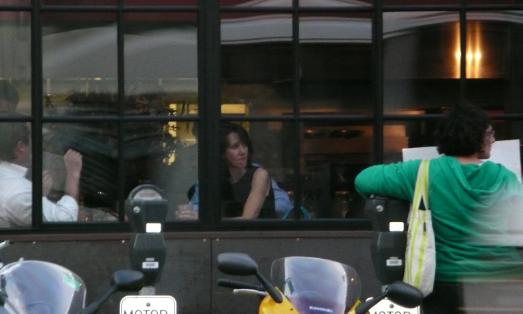 The workers' complaints, as per a flyer doled out to passerbys:

Employees of this highly profitable restaurant have filed official complaints for: unpaid wages, unpaid overtime, denied breaks. Please redeem this coupon with management and demand that they treat their employees with respect, obey the laws, and payback the wages they are own [sic]

Without taking a side in the debate, we must admit that we feel for anyone who was caught in the crossfire at Tres Agaves last night, because, as the above photo indicates, the ruckus did extend indoors to some extent. In the meantime, we'll be tracking this story as it develops.

Anyone with further observations or insight is encouraged to share. And Joseph Manzare, the floor is yours.