Chances are, if you live in or around San Francisco, it's probably been a while since you've stopped by the tourist cesspool that is Ghirardelli Square. Now, with the holiday season approaching, there's probably even less of a reason to pass through, what with half of Nebraska clogging up the area's sidewalks.

Nonetheless, locals may soon have reason to venture down towards the the square, with a host of new openings slated for the fall season. Kicking things off is this morning's opening of Cellar360 in the ol' Woolen Mill Building. Technically, it's a "wine-tasting facility" offshoot of the Healdsburg flagship, which means that tastings are offered throughout the day, with wines available for both purchase and sipping. When we stopped by earlier today, the place was surprisingly abuzz with morning drinkers (good work, San Francisco). The picturesque Woolen Mill Building is pretty cavernous, and the copious wine selection and paraphernalia are complemented by circling charcuterie and similar light fare (a larger offering of food is forthcoming). Casual tables and a bar area reside towards the rear. 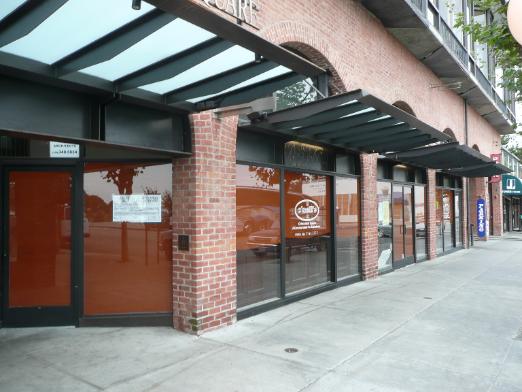 Next month: O'Neill's 3.0 will open at the foot of Ghirardelli.

November will mark the debut of third location of O'Neill's Irish Pub (pictured, above), Eoin O'Neill's mini-chain of pubs. Worthy of note is O'Neill's attempt to incorporate sidewalk seating into the equation; on tap are several tables and two dozen seats lining the waterfront sidewalk area down on Beach Street.

Finally, a bit down the line, joining Cellar360 right across the fountain in Ghirardelli Square will be Marché on the Square. Marché will be a unique endeavor from Brian Crawford, formerly of Dean & DeLuca: a two-story combination food gourmet shop and brasserie loosely based upon Fauchon in Paris. The exact opening date is still in the air, though it will be sometime in spring 2008.