This here is the Plywood Report, your regular, all-encompassing source for the next generation of San Francisco restaurants still in various stages of construction. From splashy, big-name endeavors to smaller remodelings, we've got you covered. See something a-brewing in your neighborhood? Drop us a line. Also: an 8:30 Friday night resy at Spruce if you include photos (subject to availability). 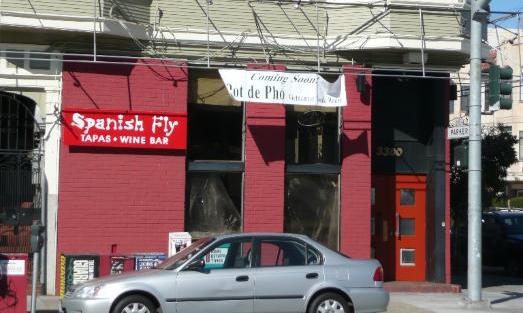 Can't imagine why a restaurant named "Spanish Fly" would fail.

1) The Richmond: Though the Spanish Fly logo remains front and center, a makeshift Pot de Pho sign has gone up on the front of the 3300 Geary space on the corner of Parker. The word on the street is that the pho restaurant, headed by Khai Duong of the acclaimed Ana Mandara, will be open within three weeks. A sneak peek inside reveals leather chairs, communal tables and, well, some confusion. 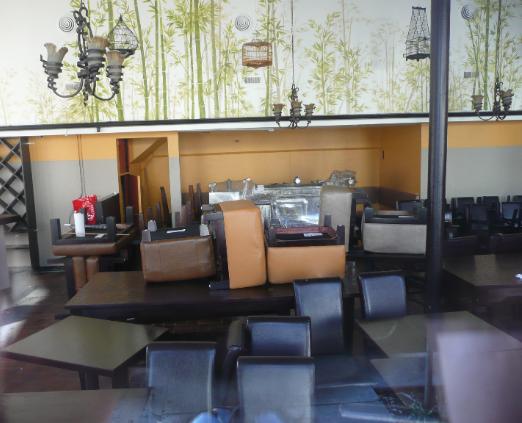 Above: a very crowded interior of Pot de Pho. Is the furniture left over from Spanish Fly like the outdoor signage or will this be the new furniture? Either way, those are an awful lot of chairs. Note the communal tables and the nifty bamboo mural. Yes, nifty. [PLYWOOD] 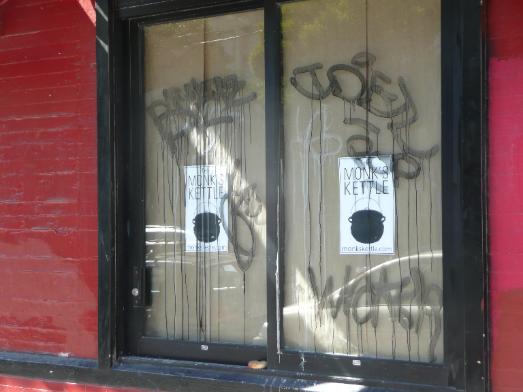 2) The Mission: Over in the Mission, Monk's Kettle, the beer/wine tavern coming in mid-November, seems to be having some unwanted fun with graffiti at 3141 16th Street (at Albion), which couldn't have pleased the guy vigilantly scrubbing the windows on Sunday. Ah, the wonders of the Mission. As for the space itself, it will be cozier than it may seem from the outside: only about 14 at the bar and counter, plus 22 seats in the dining area. Outdoor seating along Albion will also be an option once the permits go through. [Eater Inbox, PLYWOOD]

3) Bonus Mission: Moseying on down the hipster-y street, Pizzeria on 659 Valencia (18th St) has tons of new plywood on its windows, which is very odd, since when the Plywood Team passed by several weeks ago, the place looked ready to debut. We're officially .... befuddled. Anyone know anything? [PLYWOOD]

4) North Beach: Look at this segue. From a Chowhound comes the news that the former inhabitant of the Monk's Kettle space (above), Racha Thai, may be coming to Broadway: "Walking by Thai Chef on Broadway (631 Broadway between Stockton and Grant) I noticed an ownership change notice posted on the window. The new owner is listed as "Racha Thai". I'm wondering if it's related to the now-defunct Tenderloin Restaurant of the same name or the one in Berkekely [sic]." [CH]

As always, your plywood sightings, pics and general theories to sf@eater.com.