EaterWire AM Edition: Dark Nights on Fillmore and MORE

Share All sharing options for: EaterWire AM Edition: Dark Nights on Fillmore and MORE

All news fit to print goes in EaterWire, but we can't be everywhere, so feel free to share your knowledge. 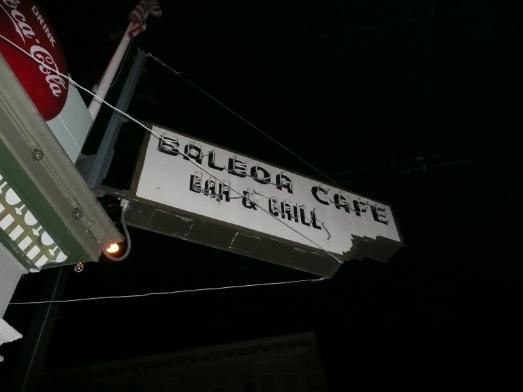 COW HOLLOW—As evidenced by the above shot, the PlumpJack restaurants were in fact dark during the Lights Out SF event. Balboa Cafe's famous, glowing green sign was off outside, and candles were aplenty inside. Up the street, despite a formal private party within its confines, all lights at PlumpJack Cafe were noticeably muted as well. MatrixFillmore seemed its normal, dark self. All around, a solid effort by the PlumpJacks. Bravo. [EaterWire]

THE MARINA—Some passers-by noticed some weekend activity at Bin 38 (Scott St, between Lombard and Chestnut). The wine bar is not yet open, but was going through some previews and dry runs. The place is just about ready to go—the picnic tables are out and everything. More on the Bin opening later in the week. [EaterWire Inbox]

POLK GULCH—More wine bar teases are going on around Polk Street. Several readers have queried as to the nature of the S.N.O.B. Wine Bar sign emblazoned on a building near the corner of Bush and Van Ness. According to someone at S.N.O.B., the sign is just an advertisement for the wine bar a block away, not a potential clue to expansion. In other words, it's more evidence that the S.N.O.B. folks really love their signs. [EaterWire Inbox]