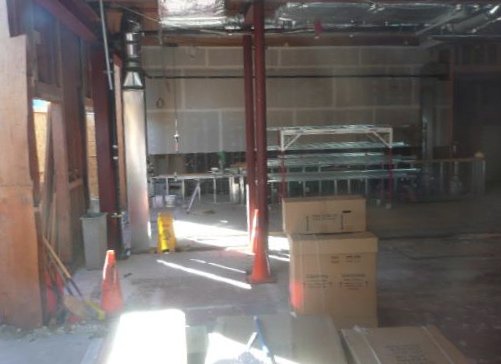 The old Prego space on the corner of Buchanan and Union will soon house Vache, a reincarnation of one of Cow Hollow's classic venues. Chef Gordon Drysdale will be at the helm of what will be a classic, bustling French brasserie. The building's reconstruction was completed this summer, but there's still plenty of work to be done in the space. The Bacchus Group (Spruce, Pizza Antica et al.) was optimistically aiming for a November debut, but it's starting to look like 2008 might be a more realistic goal. Since we stopped by about a month ago, not much looks different on the surface (compare with a photo taken a month ago.). The space still looks a ways off, which makes us wonder if the expiration date on the work permit—January 2008—will come into play at all, but if Spruce is any indication, when it finally arrives, Vache should be impressive. Is a West Coast version of Balthazar asking too much?
· Plywood Report: Vache, Mint Plaza and MORE! [~ESF~]