Say what you will about the other doings in and around the Fillmore Heritage Center, but the project's centerpiece is undoubtedly Yoshi's, the first offshoot of the nationally-renowned Oakland jazz club of the same name. They've already hired a quasi-celebrity pastry chef to complement Chef Sho Kamio. Oh, and did we mention that Yoshi's is going to be absolutely ginormous? As in 28,000 square feet between the restaurant, lounge and jazz club. To make things even more interesting, they've set a firm date of November 28th to open. Are they a mere 34 days from opening? Judge for yourself. 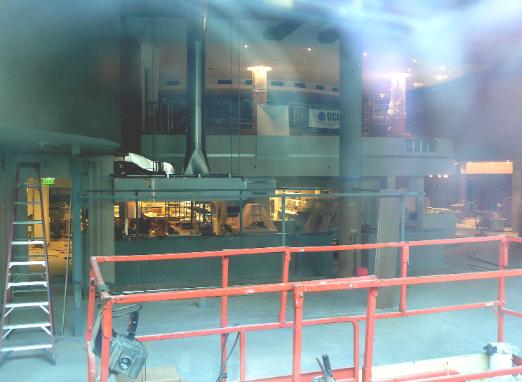 Not bad, but a month away? Admittedly, there's no other option for Yoshi's except to get the deed done (plus we're always amazed at the pace at which restaurants move in the last month before opening). In meantime, kindly note the abundance of curvature and the developing light-column things in the image above.

Will Yoshi's make its November 28 deadline? Will it save the Fillmore? Your thoughts in the comments or straight to us.