Welcome to Eater Hospice, wherein we track the painful demise of restaurants on Eater Deathwatch. 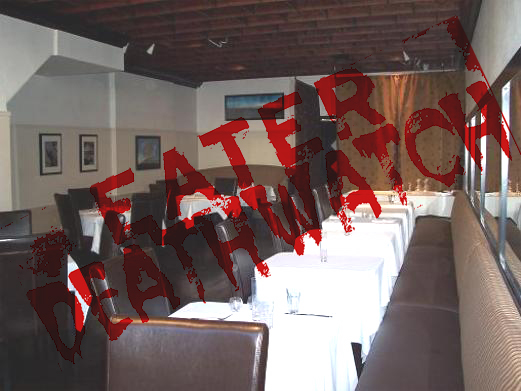 Earlier this week, the wrathful eyes of the Eater Deathwatch Committee fell upon the unfortunate case of Avenue G. Usually, some time passes before you'll get an update from the hospice on a Deathwatched restaurant, but the second half of the week brought several items of desperation worth sharing from the Avenue G front.

First and foremost, they scored a reopening notice in the local paper (they reopened in September, but whatever), so it looks like the PR side is busy. That's the "good" news; now the bad. From a passerby, we have word that Avenue G has added a promotion to the mix: jazz night (advertised on the street corner, natch). Sadly, the jazz band outnumbered the crowd two to one, says that same tipster. No, that can't be good at all. Here's the hospice paperwork:

Deathwatchee: Avenue G
Status: DEATHWATCHED
Time on the 'Watch: 4 days
Prognosis/Analysis: In a mere 92 hours on the Deathwatch, Avenue G has been very busy, a clear sign that they are indeed trying to make it work. While the new owner has reached out to various avenues of publication, added a promotion (jazz night) and taken to shilling, myriad problems (chronicled in the original Deathwatch report) continue to plague the patient. In other words, at this point, the effort is not reflected by any change in business received. You can't multiply something by zero. The holiday season and ownership change may get Avenue G through to the new year (over/under remains Christmas), but things won't be pretty unless some bigger changes take place.

Have a restaurant worthy of Eater Deathwatch? The committee accepts nominations.