The Dish: Santana Opens a Restaurant. In Walnut Creek.

Share All sharing options for: The Dish: Santana Opens a Restaurant. In Walnut Creek.

The Dish is your source for restaurant openings in and around town. Notice a restaurant that recently debuted? We gladly accept your tips. 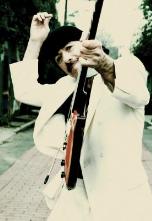 Local legend, Mission High alum and worldwide music star Carlos Santana can now add restaurant partner to his resume. A new restaurant called Maria Maria (after his hit single, obvi) has opened in Walnut Creek. It's the latest project from the Dudum group, no stranger to hokey but oddly-successful celebrity-themed restaurants (Joe DiMaggio's in SF, Bing Crosby's in Walnut Creek). As for the choice to open a restaurant in Walnut Creek—not exactly the highest-profile market—Santana and Co. say it's merely the first of several projects:

The partners plan to open additional Maria Maria eateries in other cities and to create a larger showplace restaurant called "Santana's," including memorabilia from the musician, in a more urban city.

Wait, you mean there are more urban cities than Walnut Creek? The restaurant itself will be considerably more upscale than its predecessor Cantina, so look for traditional Mexican menu items in the $12-25 entree range. And, of course, there will be plenty of Santana playing in the background (Rob Thomas if you're lucky). But Carlos, why not debut in your hometown?
· 'Smooth' deal: businessmen join Santana for Mexican restaurant [CC Times]
· Dudum Sports & Entertainment [Official Site]