Share All sharing options for: The Next Iron Chef Recap: Just Plane Chaos

Though one of our hometown chefs has already been sent home, Chris Cosentino of Incanto continues to carry the torch for San Francisco in the Food Network's newest cooking show. Here are our thoughts on last night's episode, wherein the competition was trimmed from four contestants to three. Warning: spoilers involved. 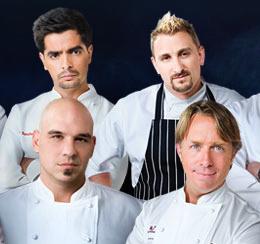 1) The final four—Cosentino, Michael Symon, John Besh and Aaron Sanchez—get sent off to Munich, and for the first time on The Next Iron Chef, the producers don't delve right into a cooking competition. Rather, we get to watch the painful scene of the four chefs trying to flirt with the cute airline attendant.

3) Alton Brown reveals the competition: 90 minutes to redefine airline food. In a welcome change of pace, he briefly slips into Good Eats mode to explain the (quite fascinating) entire airline food process. Food must be seasoned heavily, then chilled and reheated. And yes, Top Chef did it already.

4)) Meanwhile, Symon makes a joke about the airplane being the secret ingredient: "That can't fit on a stove." Ba-dum-ching!

5) Sure it's a sponsor, but how many times must the word "Lufthansa" be uttered?

6)) The challenge is the most intense to date. Cosentino in particular seems flustered, yelling in response to Alton's questions and later doing his best celebrity paparazzi-hater impression on the cameraman. You know what he needs? A nice, relaxing Lufthansa flight.

7) Quote of the episode comes from Sanchez, talking about the challenge: "It's haaaard. It's real-ly hard."

8)) Once again, Symon gets the best treatment from the judges, and we're one more cupcake question away from starting to call shenanigans. Maybe it's editing, maybe it's because he's doing well, but given his relationship with Ruhlman, Symon is just a little too chummy with the judges for our liking.

9) The elimination comes down to our two faves: Cosentino and Sanchez. Both chefs flopped in this challenge, Cosentino with his "playful renditions" of classics (?) and Sanchez with his mushy, skin-on red snapper. In the end, Sanchez is out, even though the judges criticized Cosentino more. We're going to miss Sanchez and his Napoleon Dynamite lilt.

10) Looking ahead, we hope our hometown guy can pull it off, but he's definitely the underdog. Besh and Symon have been the frontrunners throughout, and with the next competition in Paris, the Italian meat man has his work cut out for him.

Your Next Iron Chefian thoughts in the comments field.