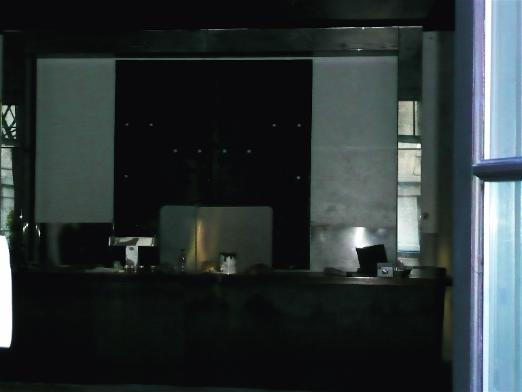 1) Mint Plaza: As previously reported, when it comes to the city's favorite future pedestrian walkway project, Chez Papa is the restaurant that looks to be odds on favorite to open first, though that's a bit of a "tallest midget" proclamation. Of the four restaurants under construction, Chez Papa's 414 Jessie Street space is the closest to the exquisite sights and sounds (and smells) of Fifth Street. The ceiling has since been painted a maroon/dark brown, and yesterday, a workman was seen installing modern-looking light fixtures. The interior itself has reasonably high ceilings and tall windows, so a bustling bistro atmosphere looks to be a good bet. 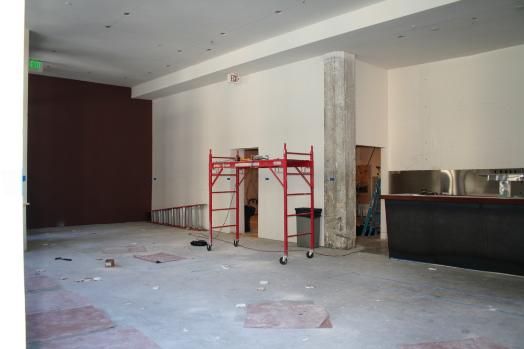 Another shot of the Chez Papa interior. Note the dark color theme.

2) Broadway/North Beach-FiDi Outskirts: 498 Broadway is in the middle of the city's finest strip club stretch, but that hasn't dissuaded Ola Fendert of Oola—who is already quite busy these days with Local—from opening a burger joint called Horizon. From Horizon's Open Table listing:

Horizon offers the classic American favorite – the Burger. You may create your own first selecting the meat: lamb, kobe beef, tofu, chicken or even fish and build it with the type of bun---brioche, whole wheat, or sesame. Our menu also draws from other American favorites such as Mac and Cheese, Ribs, Fish and Chips as well the fresh fish of the day.

What can we say? The gourmet, choose-your-meat burger is the new black. Smartly, it will be open late (get those drunktards!), and there will be a full bar as well, which is always good.

3) Hayes Valley: The newest, greenest branch of the Boulange bread conglomerate, La Boulange de Hayes, remains plywooded on the corner of Hayes and Octavia. October 1st was thought to be the opening date, but according to a tipster, no dice. Yet. Next week, however, should mark the debut.

See some plywood? Don't be shy.