Eater Investigates: Why Isn't Anyone at Out the Door?

Share All sharing options for: Eater Investigates: Why Isn't Anyone at Out the Door?

Insert your "out the door" pun here.

Sometimes we wonder about you, San Francisco.

When we first heard word that Charles Phan was disappointed in the performance of Out the Door, the first true offshoot of the venerable Slanted Door, we can't see we were incredibly shocked. After all, it's in the basement food court of a mall—an upscale mall, yes, but a mall nonetheless—and when it comes to turning dinner tables, the Westfield San Francisco "Centre" isn't an ideal location. But at the same time, it's Charles Phan, people, and there is no reason that Out the Door should be wasting away during the dinner hours, especially when the rest of the food court has lines aplenty.

Needing to see it with our eyes, the Eater Investigative Staff was dispatched to the mall. Arriving around 6:30pm, the mall food court was still abuzz with a motley crew of mostly after-work shoppers, some young people and a small handful of tourists. Upstairs, Lark Creek Steak had a pretty decent business dining crowd for a Tuesday, both at the bar and in the main dining room.

But back to the downstairs quandary. Only about half of the two dozen tables in the back area of Out the Door were filled, with a lone person ordering take out at the register. What gives? By contrast, most of the other, more "mall-foodie" booths in the food court at lines up to 10 people. 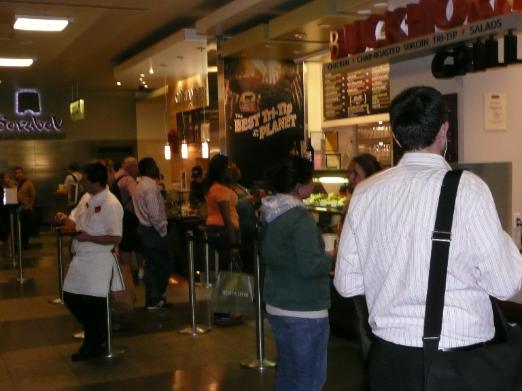 Witness the above flurry of activity at the Buckhorn Grill and Coriander Thai. No offense to the aforementioned pair, but can they really hold a candle to the Charles Phan machine?

But the question remains. There is a market of diners. why isn't Out the Door being embraced more? Blame it on the tourists? Mall-goers? Does anyone have an outside-the-box theory?

Discuss.
· Out the Door [Official Site]
· Charles Phan only now realizing he opened his new restaurant in the MALL FOOD COURT. Ahem. [Covers]