Last we checked in on Rick Bayless' venture into the basement at Macy's Union Square, work had yet to begin on the Frontera Fresco side of things. The Eater Investigative Squadron learned that the existing chocolate shop was to move across the aisle to make room for the Nuevo Latino giant. As of this week, the candy space has been completely gutted and a plywood wall has been erected in preparation for Frontera Fresco. Our findings, revealed: 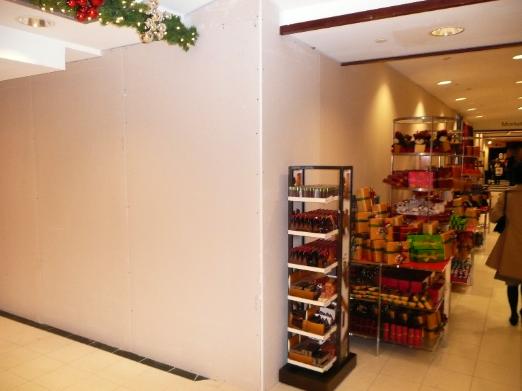 Hey! It's plywood and .... not much else. BUT, we did manage to catch a peek of the other side of this white wall—a large man said no photos of the interior (his advice was heeded). From what we could tell, it's about the same size as the Wolfgang's outpost next door: low ceilings and enough room for a counter and some tables. Just about zero Frontera work is visible in there right now; still, we're betting it'll be done in time to catch the Black Friday shopping rush. That would be the sensible approach, right?
· Eater First Look: Rick Bayless' Venture into Macy's [~ESF~]