The City welcomes a flurry of restaurant openings every fall, but when said restaurants actually open is anyone's guess. The Dish is happy to bring you the latest in unveilings. 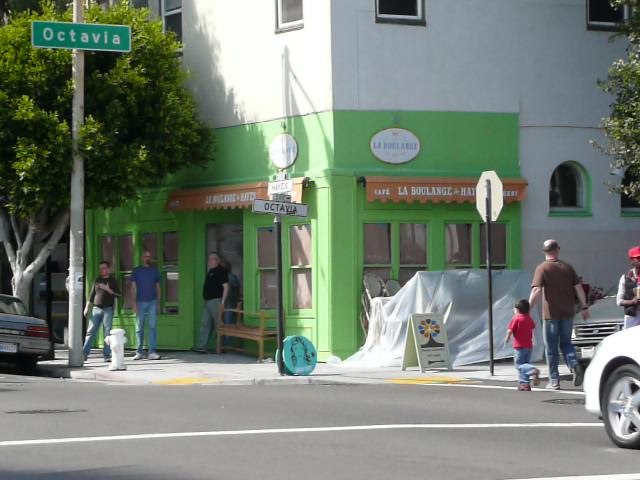 1) Boulange de Hayes: The greenest restaurant in town—literally, not environmentally—will open on Wednesday. Expect the same general fare/flair as the other Bay Bread Boulange locations, with the added benefits of bright green exterior walls. In all fairness, the interior of Boulange de Hayes is decidedly less abrasive. Welcoming, even. If the popularity of the other branches is any indication, it should be a nice spot to get your pastry/coffee fix. The extent of the crowd, however, is TBD. 500 Hayes St at Octavia, Hayes Valley, (415) 863-3376 [Eater Staff]

2) Sultan: Last week, we had the Helmand's dramatic return, and now at long last, another ethnic cheap eats favorite, Sultan will reopen tomorrow in its new location just off Union Square. In a city whose Indian cuisine is (generally) lacking, Sultan is a welcome mainstay that has been out of service since the Taylor Street location closed in May. But tomorrow at 11am, the $10.95 buffet will be back in its new digs. 340 O'Farrell St between Mason St & Taylor St, Union Square/Tenderloin, (415) 775-1709 [Eater Inbox]

3) Jubili: The city's second yogurt destination and Fro-Yo War darkhorse opened this weekend, and Jubili is already evoking Pinkberry comparisons: "My Trip to Jubili was as delicous [sic] and refreshing as any pinkberry concotion [sic], with none of the hassle. A small with 2 fruit toppings (kiwi and raspberries, yum!) was less than $4. It was well staffed and had prompt service (although, I'm sure that there will be lines as soon as word gets out)." 1515 Fillmore St between Geary Blvd & O'Farrell St, Fillmore/Western Addition, (415) 292-9955 [Eater Staff, Yelp]