EaterWire: No, Not the Oysters Too

Share All sharing options for: EaterWire: No, Not the Oysters Too

All news fit to publish goes in EaterWire. Got some juice? We have you covered. 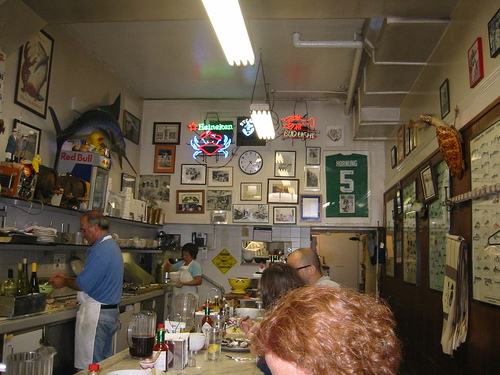 MARIN—Dungeness season already took a hit. Now, the largest oyster company in the North Bay, Drakes Bay, has been forced to close as a result of last week's oil spill, putting more than half of the state's oyster supply at risk. Furthermore, the closure may put Drakes out of business: "The state Department of Fish and Game 'told us to expect losses,' [owner Kevin] Lunny said. 'It doesn't take much to harm filter feeders (oysters). The oil clogs up their gills and they die.' ... Drakes Bay produces more than 80 percent of Marin County's $3.3 million in farmed shellfish annually. All of the county's other oyster farms are located in Tomales Bay. 'We're potentially looking at millions of dollars worth of product losses and a year and a half without production.'" P.S. Here are just a few of the restaurants that serve Drakes Bay oysters: Zuni, Slanted Door, Fish, Aqua, Farallon and Swan Oyster Depot (pictured). [Marin Independent Journal]

DUBLIN—Yeah, what the hell is in Dublin? Well, ironic twists for one. The New York Times did a whole story yesterday on the tribulations of Scott Adams, creator of the "Dilbert" comic strip and owner of Stacey’s at Waterford, as he has evolved into the pointy-haired boss of his parodies: "So, in July, he agreed to take over day-to-day operations of Stacey’s at Waterford, thus becoming what he has consistently ridiculed: a boss ... In interviews authorized by their generously self-deprecating boss, employees describe him as trusting and appreciative, full of off-the-wall ideas about how to turn around the business, and dramatically clueless about the harsh realities of the restaurant industry." [NYT]

THE RICHMOND—While some may argue that the Richmond is even more obscure than Dublin, well, there's no denying that it's foggy. In any event, the Balboa and 41st Avenue space that used to house the Russian restaurant Traktir—a graceful name by any measure—will soon be home to a restaurant called Yuzen. By the name, we're guessing it might be of the Japanese ilk. [EaterWire]