Share All sharing options for: The Next Iron Chef Recap: Greatness Attained

Even though, for the first time, no local chefs graced the competition this week, we figured it only appropriate to round out the season and share our thoughts on the finale that saw John Besh and Michael Symon take to Kitchen Stadium. Warning: spoilers follow. 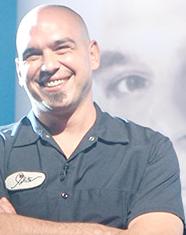 1) Symon and Besh meet for the last episode of this much-too-short but wildly entertaining debut season. The challenge? Dubbed "Attain Greatness," it's an old-fashioned battle in Kitchen Stadium.

2) We have a sneaking suspicion that Besh's sense of humor isn't quite up to snuff if he thinks Symon's jokes are "hilarious."

3) Alton Brown—decked out in a tux, obviously—announces that three of the four iron chefs will be observing the battle (and later judging the fare). Gee, which iron chef could be missing? Hmm ... it certainly couldn't be the one rumored to be leaving, could it?

4) The secret ingredient: swordfish. Early advantage goes to Besh, who seems to deal with fish on a more regular basis than his meat-loving counterpart.

5) +1 to Symon for busting out the bone saw to pop the collar of the swordfish. Innovative and flashy.

6) Another +1 to the man from Cleveland for using the sous vide technique he learned earlier this season. He certainly knows how to woo those judges.

7) Halfway through the battle, Besh hasn't shown his signature myriad beads of sweat. Come to think of it, he hasn't been sweaty since the first several episodes. Maybe that's why his luster has faded (not unlike Samson and his locks).

8) Besh's only notable kitchen moment comes in the last minutes of the battle when he whips up a fish dessert at the behest of Morimoto. It can't be good that he did nothing notable in the first 56 minutes, can it?

9) Speaking of Morimoto, that man is unbelievably entertaining. In about a ten minute span during judging, he jubilantly squeals—squeals!— "punch! punch! punch! punch! punch!" to Symon and then explains his thought process ... in sketch form. This man needs his own reality show STAT. Would you not watch an episode of Morimoto traipsing about Manhattan? It's a gold mine.

10) In the end, Symon wins, with his swordfish collar winning best dish of the night honors, which goes to show you that bone saws rarely go wrong. Even though Besh grew on us as the season progressed, Symon really seems to understand what iron chefdom entails. Simply put, his cuisine was merely more creative and interesting than Besh's. Dare we say it reigned supreme?

We do hope you enjoyed The Next Iron Chef—and these little recaps—as much as we did. Please feel free to share your final thoughts on the season and finale in the comments fields. Did Traci des Jardins gets screwed? Do you wish Chris Cosentino could have made it to the final challenge? Are you happy with Michael Symon's victory?