EaterWire: Books Tonight, Wine Tomorrow (It's Much Easier In That Order)

Share All sharing options for: EaterWire: Books Tonight, Wine Tomorrow (It's Much Easier In That Order)

Your EaterWire juice, as always, to sf@eater.com. 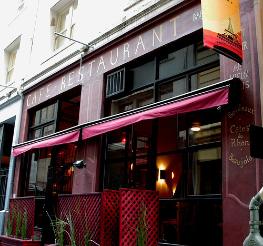 FERRY BUILDING—Gina DePalma—pastry chef at Mario Batali's NYC flagship Babbo—will be discussing and signing copies of her first book, "Dolce Italiano; Desserts from the Babbo Kitchen." Tonight's event lasts from 6 to 8pm and takes place at Sur La Table. Also, look for DePalma to return to the Bay Area as one of dozens of big-name chefs in the star-studded Pebble Beach Food & Wine shindig. [EaterWire Inbox]

CITY-WIDE—Tomorrow is, of course, the third Thursday of November, which means that it's Beaujolais Nouveau time. Just about every French restaurant in town is expected to have some sort of celebration (Zagat has a nice list), but the most concentrated party might be on Belden: "Some say by the time that tomorrow is over, nearly half of the region's total annual production will be distributed and drunk around the world.This year's Beaujolais Nouveau celebration is on November 15th and the cafes along Downtown's so-called French Quarter, around Belden Alley and Claude Lane, such as Cafe Bastille and Café Claude [pictured], are the most popular places to knock back one of the hastily bottled vintages." [Zagat Buzz]

OIL SPILL AFTERMATH—With this whole oil spill fiasco and its impact on dining, it does seem like good news and bad news continue to alternate, doesn't it? Since Wednesdays are happy hump days, a bit of good news from the oyster front. According to Drew Alden of the Tomales Bay Oyster Co, all Tomales Bay farms (including Hog Island) are thus far untouched by the greasy oil devil, which is a relief, because if we can't enjoy oysters this fall, then the terrorists have already won. [MenuBlog]