Just walking around Ghirardelli Square evokes a profound sense of old-time San Francisco, from the always-breathtaking vistas of Alcatraz to the plethora of historic brick buildings littered about the plaza. It's such nostalgia that makes us hopeful that the revitalization project underway has a chance to ingratiate the area to locals once again. Cellar360 has been up and running for several weeks now and Marché on the Square, a brasserie-gourmet food shop combo, is still aiming at early 2008. Also, you didn't hear it from us, but a restaurant space or two is still open, and rumor has it that some big announcements loom on the Ghirardelli horizon.

Arriving next week will be O'Neill's, the newest Irish pub/restaurant from Eoin O'Neill. He's expecting to get his liquor license this Friday, and if Monday's inspections go well, O'Neill's—at the bottom of the square on Beach Street—will be open as early as Tuesday. In addition to Irish breakfast and other pub grub, scenic sidewalk seating will also be offered, with the water literally across the street. The big, traditional-looking space is coming along nicely (pic after the jump), and come this weekend, will be highlighted by—get this—a giant indoor mural featuring Sinead O'Connor, Bono, JFK, Daniel Day Lewis, Maureen O'Hara and James Joyce sitting around a table drinking pints with ... Eoin O'Neill. Brilliance. 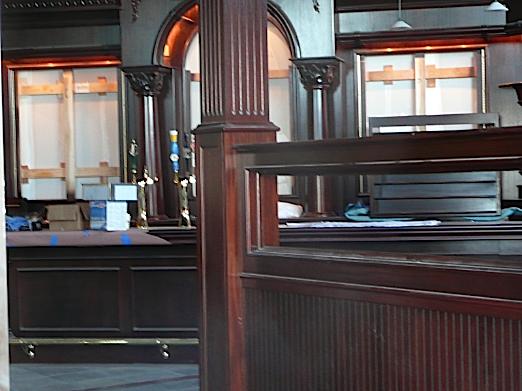