We don't do restaurant reviews per se here at Eater, but no worries: there are plenty of other bloggers that do. Here are latest and greatest dining impressions from the local blogosphere. Know of a blog that should be on our radar? Do share. 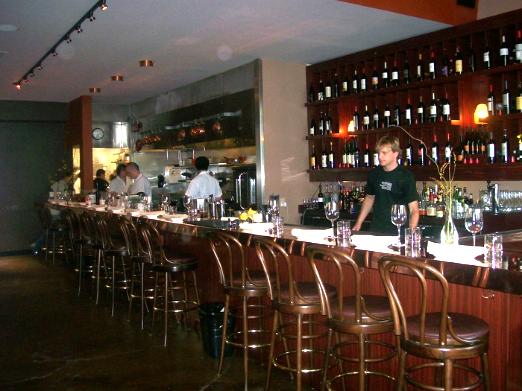 1) Leading off this week, we have Chef Ben at Laiola, where he worries that the new reservation system might upset the good thing that Mark Denham and Co. have going:

It's first-come-first-serve approach to dining was refreshing for a solo diner like myself, where I could find a seat along the long bar and watch the front row action of either the bartender or the line cooks near the kitchen. But just recently it instituted reservations (by phone after 1 p.m. or via OpenTable). This is probably good news for large parties not wanting to wait, but I feel like Laiola loses some of its small, neighborhood restaurant vibe with this step. We'll see.

Most of the tapas plates are winners, but slow service and a burnt dessert put a bit of a damper on the occasion. Nonetheless, Laiola remains a restaurant to be applauded for capturing the essence of a neighborhood and then some. Even if it is the Marina. [CWTSG]

2) It's Friday, and that means Michael Bauer would like to have a word about pizza. This week, he's at Piccino, a diamond in the Dogpatch. In fact, the review itself—thin crusts, charred blisters, quaint setting—is so standard that these Pizza Fridays are becoming a bit monotonous, or as a commenter so eloquently puts it: "Maybe Michael can do a pizza restaurant Swimsuit Edition at some point? It would certainly break the monotony of these pizza reviews, which are all starting to look the same to me." [Between Meals]

3) Tim Wudarski at 7x7 has very high praise for the smelts at Bossa Nova, Jocelyn Bulow's rather new and trendy SoMa Brazilian bar-resto. The cocktails and music are all well and good, but oh, those smelts: "The slight sea taste, the crunchy coating and the spicy dipping sauce make them the perfect snack to go along with cocktails and music." [Bits + Bites]

ELSEWHERE: As far as we're concerned, Food For Thought hits the nail on the head at 1300, saying the place "exudes sophistication without feeling overly formal." The Daily Feed crew wades through "acceptable" burgers at Burger Joint to get to the heavenly milkshakes. Not For Tourists sheds light on Central Cafe in the Haight, and finally, we have a Cyrus recap from LiveJournal.