Your regular dose of restaurant and bar closings around town arrives via The Shutter. The City is unforgiving when it comes to restaurants, so do share you sightings. 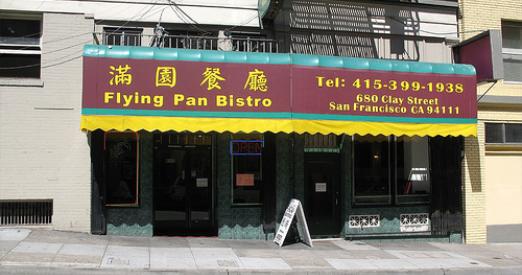 In a fairly notable Chinatown shuffle, Flying Pan Bistro, the causal offshoot of Jai Yun, has closed due to a lack of business. It's the end of a short but drawn-out tale of woe for Flying Pan Bistro. Though its authentic, hand-made Shanghai noodles quickly made it a favorite for Chowhounds and the like, the combination of a difficult location tucked away on Clay and Kearny and a curious lack of a take-out option (hello FiDi workers) were too much to overcome.

Perhaps even more notably, Jai Yun—the hole-in-the-wall, tasting menu-only restaurant dubbed by some as "the French Laundry of Chinese restaurants"—has already taken over the former Flying Pan space at 680 Clay Street. Supposedly, everything from the hours to the food remains the same in the new digs, and the only reason given for the move by the Jai Yun people is that they "like the new space better." Given the success Jai Yun has had in its Pacific Avenue location and the difficulties of Flying Pan Bistro in its Clay Street location, we're filing this move under "quizzical." Or, of course, "money decision."