Bar Jules Reveal: The Interior and the Menu

Share All sharing options for: Bar Jules Reveal: The Interior and the Menu

As mentioned yesterday, opening tonight is plywood vet Bar Jules. Avid readers and diners—not to mention people with eyeballs—will be happy to know that the interior color scheme has been toned down a bit from the initial aesthetic shock we found there some weeks ago. Also, the liquor license has yet to go through, so BJ is BYOB at this point, FYI. Jessica Boncutter is running things at 609 Hayes, and with her pedigree (Zuni, Hog Island, River Cafe), the menu—scrawled on a chalkboard; pic after the jump—will change daily. Be warned though: this might be the most limited menu in the entire city. Witness: 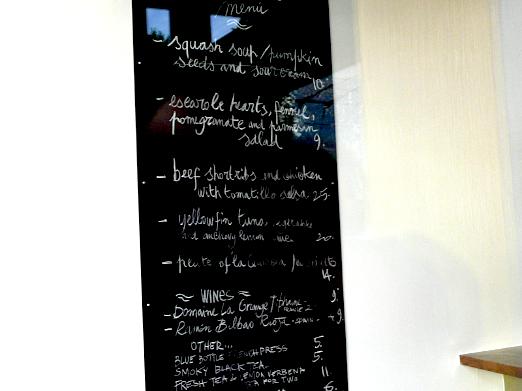 Compare the above menu, from the soft opening, with tonight's debut menu. Though some changes exist, the rubric seems fairly set: two apps, two entrees, two sides, a dessert. Not much choice, which is interesting, no? Hope you're in the mood for oxtail or tuna.
· Bar Jules [Official Site]
· The Dish: Tuk Tuk Thai, Bar Jules [~ESF~]
· Hayes Valley Quite Possibly Colorblind [~ESF~]

It’s Official: the Castro Can Welcome New Bars for the First Time in 35 Years