Share All sharing options for: Week in Reviews: Palmetto, Osteria, Bacco and MORE

It's time for yet another round of the Week in Reviews. Michael Bauer is still recovering from his South American trip, but there's still plenty of reviews to go around, including plenty of Mediterranean ventures from the major weeklies. Let's get to it, shall we? 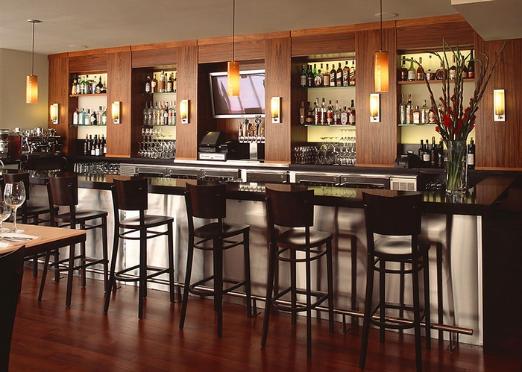 The bar at Palmetto [Photo: Yelp]

Leading things off, Meredith Brody is at Palmetto, where she shares some instantly memorable lines that have, well, nothing to do with Chef Andy Kitko's Union Street newbie:

We decline the first two tables offered to us — the little glass box that sits on the sidewalk is not only empty but cold, and there are laborers working outside

We're not quite sure who uses the word "laborers" anymore, but one thing is crystal clear: thou shalt not sit Ms. Brody near common plebians, you hear? As for Palmetto itself, Kitko's modern Mediterranean fare predictably impresses (though less so at lunch), with the delicious, yet slightly-gimmicky blue-foot chicken quickly becoming the second-most famous poultry dish in town behind one Zuni Cafe's. [SFW]


Stopping by Osteria and Bacco, Paul Reidinger hits two established Italian joints with one review. After a "homey" dinner at Osteria (the opposite environment of nearby Spruce), Reidinger points out that before the arrival of Incanto, La Ciccia et al., Bacco was once the best Italian Noe Valley had to offer, and it's still among the neighborhood's finest: "Bacco's owners, Paolo Dominici and Vincenzo Cucco, haven't been lazing on their laurels. They've picked up a Zagat rating, for one thing, and, for another, they've replaced the terra-cotta paint scheme with one of sage and butter. There's also now a beautiful interior Old World arch. It would be difficult to improve on the food." [SFBG]

Patricia Unterman gives a hearty thumbs up to the chewy pasta magic happening at SPQR: "If the A-16 juggernaut was built on authentic Neopolitan thin crust, wood-fired pizza, the soul of the smaller SPQR resides in excitingly chewy house-made dried pasta sauced with traditional Roman simplicity. When you bite into SPQR pasta it fights back, springy, feisty, almost meaty, and chefs Nate Appleman and Daniel Holzman treat it as the main attraction." [SFE]

Chris Demento and the Guardian's mini-review set their sights on Clement Street's Happy Garden Restaurant, where the hidden menu is worth discovering: "Wow, this place is excellent, and even better if you can swing an off-the-menu order or two. When I visited this affordable, familial gem on Clement, there was extra tomato soup in the back, a nice little on-the-house warm-up dish that was a bit on the sweet side but afforded a friendly lesson in etymology" [SFBG]

ELSEWHERE, The CC Times spends Thanksgiving at venerable Oakland institution Bay Wolf and still has 3.5 stars for Chef Louis LeGassic. Reidinger briefly sticks his head in at Bistro Boudin, The Tablehopper hits a brunch staple in Andalu, Olivia Wu heads to Richmond for Cantonese at Daimo, and Karola Saekel has 2.5 Chron stars for the Pinole Creek Cafe.