Share All sharing options for: Eater Inside Sneak Peek: Yoshi's

The restaurant at Yoshi's won't be opening until the weekend, but the adjacent jazz club's debut last night has everyone abuzz, with 82-year-old Roy Haynes rocking the house. Once you step inside the door Yoshi's, you are still not technically inside Yoshi's; rather, a lobby decked out in jazz paintings greets you. A box office lies to the right, with a pair of entrances to the left. Once you get inside and wander around the space, you notice how massive it is. The restaurant seats close to 400 by itself (400 more in the club), but a maze of sleek staircases and foliage-filled underpasses make the 30,000 square-foot space somehow seem smaller than it is really is. There's an open kitchen, complete with live, fire-filled ovens. The decor treads between traditional (dining room) and modern (bar), with some questionable colored lighting in the background. As for the food, Chef Sho's menu has yet to be revealed, but expect it to be not too far from the menu at Yoshi's Oakland, and don't forget about Top Chef vet Marissa Churchill on the pastry chef front. More Yoshi's pics follow: 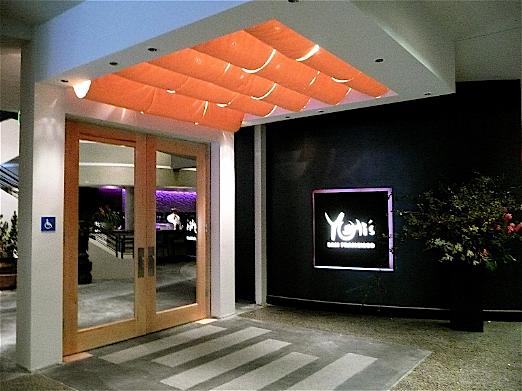 Either the second or third entrance. 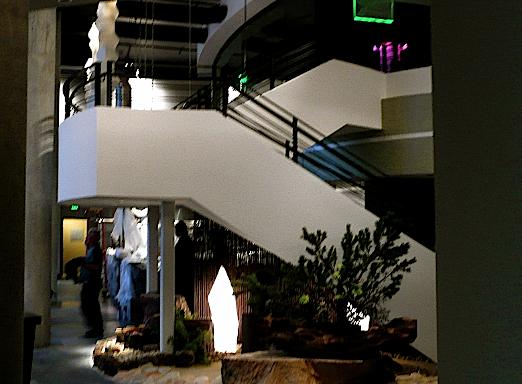 One of several stairwells. Dining room to the left, bar to the right, upstairs to the upstairs. 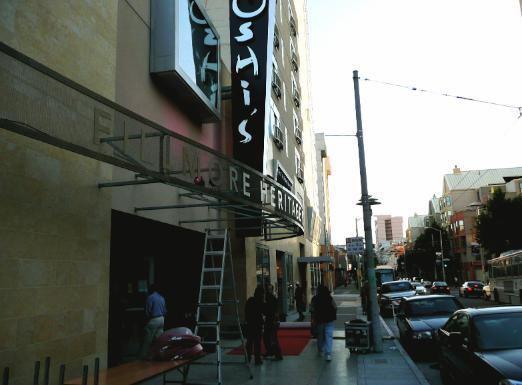 We just had to get visual proof of a red carpet and velvet ropes on Fillmore Street.
· Yoshi's Might Inspire Pac Heights, Not The Fillmore [~ESF~]
· Breaking Yoshi'sWire: Restaurant Won't Open Wednesday [~ESF~]