It's Friday afternoon, and that means it's time to reminisce on the week that was at our sister site and friendly neighborhood blog, Curbed SF. 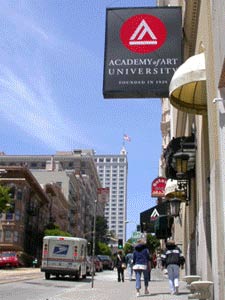 1) Chinatown/FiDi: Suits have been filed and feelings hurt in a pair of battles involving university developments. Up first in the Financial District, the expanding Academy of Art's guaranteed housing is not going over well with, well, anyone. On a similar note, the "visual impact" of City College's Chinatown upcoming 14-story campus—not to mention the shadows!—are already being knocked as an eyesore. Because the last thing Chinatown wants is an eyesore.

2) CraigslistLand: A special seasonal feature dubbed Holiday Special recently rolled out this week, and it provides a glance into the ridiculous Christmastime housing swaps proposed on Craigslist. So if you want to loan your crappy Mission studio to a Spaniard in exchange for a free stay at his farmhouse, hop to it.

3) City-Wide: As 2007 fizzles to a close, it's time for a Curbed holiday tradition: the Curbed Cup, a grueling, four-week elimination tourney to determine the neighborhood that had the best year. Our money's on a minty-fresh SoMa. Well, either South of Market or Bopabesomipo. If you have any strong feelings, do be sure to make yourself heard. Nominations are now being accepted; the brackets will be revealed next week.