All new openings—big and small— are served up on a regular basis by The Dish. Notice a debut in your 'hood? Your sightings to sf@eater.com. 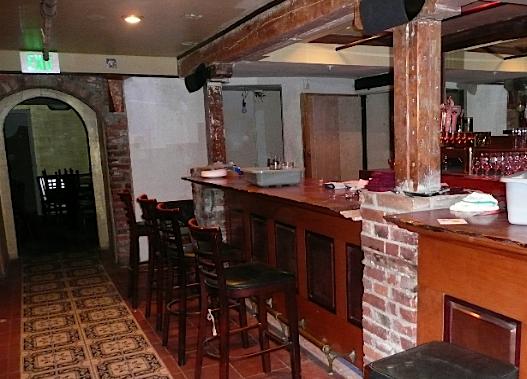 The downstairs bar at La Trappe.

1) La Trappe: Tomorrow night, the Belgian cafe and restaurant finally makes the jump from the Plywood Report to the Dish. Let's review, shall we? The upstairs at La Trappe is a casual cafe-ish area and a more formal dining room lies downstairs in the catacombs. The fare will be traditional Belgian, with all the usual suspects: lots of beers, mussels, frites and the like. The menu—sans prices (grrr)—can be found on the official site. 800 Greenwich Street, at Columbus, North Beach; Phone N/A, website [Eater Staff]

2) Moose's: Just up the street, Moose's reopens tonight after a brief closure that brought about a complete remodeling. The North Beach stand-by is going for a more accessible, modernized vibe. Those classic white tablecloths are out, and a 20-seat communal table is in. Also new to the show is Travis Flood, the new executive chef who will unveil an updated menu that, according to the press release, showcases "contemporary American food with innovative flavor profiles." 1652 Stockton Street, between Filbert & Union, North Beach; (415) 989-7800, website [Eater Inbox]

3) Cava22: From the Chronicle comes word of a Popul Vuh offshoot right across the street from Lolo: "Last week, [Roger] Magana opened Cava22 in the former space of Bahia Restaurant (3239 22nd St.). Roman Beltran, former kitchen manager of Coco500, heads up the kitchen. Beltran's menu features tapas as well as entrees such as carne asada, seafood stew and duck breast. Tequila-based cocktails are the signature drinks." 3239 22nd Street, between Mission and Valencia, The Mission; (415) 642-7224 [Chron]

4) Bender's/Satellite: Elsewhere in the Mission, Ms. Tablehopper has it that not only has Bender's reopened after a fire, but a snazzy little development lies within: "... And there is a mighty cool project inside the full kitchen: Weird Fish has launched Satellite as of last Friday. Look for some Weird Fish favorites, like fish and chips and tacos, along with the buffalo cat wings (deep-fried and spicy catfish) or buffalo girls (seitan)—both come with blue cheese and celery, like they should. There are also cheese steaks, burgers, and all kinds of fries, onion rings, and yes, the fried pickles." 806 S Van Ness Avenue, at 19th, The Mission; (415) 824-1800, website [Tablehopper]

All openings, as usual, to the Dish Hotline.