With nearly a dozen restaurants in the "any day now" phase, The Dish, your source for recent restaurant openings, will be getting plenty of action over the next couple weeks. Before we set sights on the city restaurants, some noteworthy newcomers have arrived down in the 650. If you have a morsel for The Dish, please do let us know. 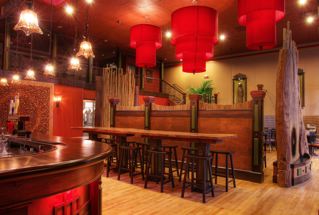 1) Red Lantern: This past weekend saw the debut of Red Lantern, the Southeast Asian home-style restaurant from Daniel Sudar, former chef du cuisine at San Francisco gem Betelnut. The 3700-square-foot space follows all sorts of feng shui principles, and we're nearly certain that it's the only place on the seaboard that boasts "a 20-seat communal table made from petrified wood found in a river bed in the Philippines." 808 Winslow Street, at Broadway, Redwood City; (650) 369-5483 [Eater Inbox]

2) Little Sheep: The glory of the Chinese hot pot chain has reached the friendly confines of San Mateo. From Chowhound: "Little Sheep opened last night on Ellsworth in San Mateo. I went by today but had just had sushi at Hotaru (which was great - best sushi quality/$ ratio in town) - so didn't try it. We did talk with the owner or manager - very friendly, she explained that it took them 10 months to open due to the conversion with PG&E (physical and bureaucratic both apparently) for the gas burners to fire the hotpots. But, they are finally open." 215 S. Ellsworth Avenue, at 2nd Avenue, San Mateo [Chowhound]