Have a favorite restaurant that just may be going downhill? Your worry-filled alerts to sf@eater.com. 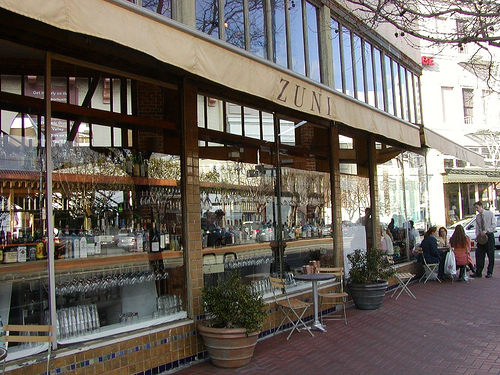 Before you crucify the messenger for spouting sacrilege on a San Francisco institution, allow a preamble from the inbox:

Over the weekend, I took out-of-towners to Zuni Cafe. Since they were East Coast foodies, I was expecting to wow them with some Cali cuisine, but they were largely indifferent to the experience. They thought it was perfectly fine, but nothing special. Our service was spotty and as I expected the pricetag was hefty. The meal led to a conversation about Zuni, and if the Bay worships it too much and if it was going downhill. Not so much going downhill as failing to keep up with the times (with "eh" service tacked on). Granted no one got the chicken, but the expereience [sic] was not all that.

Zuni Cafe is an odd situation, if you ask us. By now, Judy Rodgers has probably had it with the myriad requests for "the chicken!"—what would happen if she took it off the menu? bedlam?—but Zuni, by our assessment, is still great for what it is: a clean, breezy, somewhat trendy institution. But along with other locals, have we become jaded? Recent reviews on Chowhound have been subpar ("We went to Zuni and we were really disappointed. I guess we expected more..."), and for what it's worth, both Michelin and Zagat refuse to put Zuni in the upper echelon.

So we ask: where do you put Zuni in the SF restaurant scene? Does it remain a destination? Has it indeed gone downhill? Or is it just as good as ever?

You've heard our thoughts. Now, yours in the comments field or directly to the Eater Inbox.