Share All sharing options for: The Next Iron Chef Recap: Forget Paris

The penultimate episode of the Food Network's reality cooking show has the competition down to three chefs, including local hero Chris Cosentino of Incanto. Our thoughts on last night's episode follow. Warning: spoilers involved. 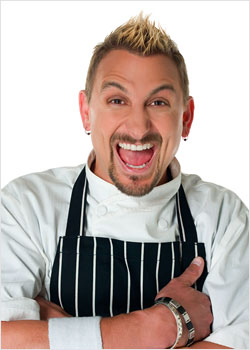 1) The final three—Cosentino, Michael Symon and John Besh—arrive in Paris for the last challenge before the Kitchen Stadium showdown: "Lead and Inspire." The challenge: spend 2,000 euros in Paris to prepare an American feast for 20 rich people.

2) There's no doubt that everyone has been or will be making fun of Besh's "Captain Fraternity, Ivy League Edition" outfit, so we'll just leave it at this: if Alton Brown is making fun of your outfit, it's not a good idea.

3) As soon as Paris came into the picture, it was clear Cosentino and his Italian inclinations would be at a disadvantage. Toss in the Americana theme for the chef who relies on local ingredients and offal, and you've got a bit of a skewed playing field. Couldn't they have at least shipped them off to Rome for this challenge?

4) Besh trying to speak French in the butcher shop while donning the gold-buttoned blazer actually makes him a bit endearing and fun. Either that, or reason #241 why Europe hates America.

5) Cosentino can't even find burrata in Paris. He settles for something "close to burrata." Gulp.

6) Thinking the French actually know the word, Symon asks the French cabbie how to say "victory" in French. Someone skipped history class.

7) To the cooking: each chef gets a French sous chef to help out in the kitchen. Another foreboding sign arises when Cosentino starts doing the "confessional talks" with his legs crossed.

8) All the chefs do modernized versions of classic American dishes. Cosentino does a lobster roll (with mayo made from lobster guts!), a Philly cheesesteak and a boozey melon salad. Symon one-ups CC with a lobster hot dog, and Besh continues to shine with a coxcomb stew as a variation of chicken pot pie. This challenge was right up the others' alley.

10) Sidenote: it just doesn't seem like a real episode of The Next Iron Chef without Aaron Sanchez making a ceviche.

11) As expected, Cosentino gets the ax, leaving Besh and Symon—the two favorites throughout—in the final. We're sad to see CC go, because he brings an edge that the happy-go-lucky Besh-Symon tandem doesn't. At the same time, maybe this means that he'll be at Incanto more, so perhaps his loss is a victory for San Francisco diners.