DelayWire: Red Tape Not Fun, But Excuses Are Enjoyable

Share All sharing options for: DelayWire: Red Tape Not Fun, But Excuses Are Enjoyable

Fall is a time for restaurant openings, but when said restaurants open is anyone's guess. With a flurry of debuts looming, here is a rundown on the various states of affairs. As always, your hints to sf@eater.com 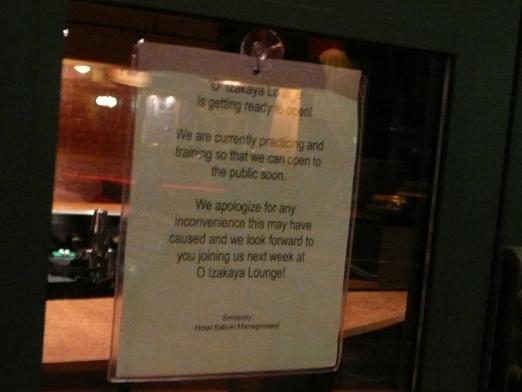 1) Japantown: Though we suspected an opening this week was a longshot—despite the hopeful outlook of a source there—next week remains the date for the Hotel Kabuki's O Izakaya Lounge. The official opening is tagged for the 15th, but look for a soft opening this weekend. As we shared last week, the place looks ready to roll. Reason for delay: practicing, training the staff, sorting out the menu. [EaterWire]

2) The Marina: Chestnut Street eatery Blue Barn Gourmet is reportedly ready to debut, but they "are at the mercy of the health department." Assuming they pass inspections and the like (the health inspectors come today), they could open as soon as this Saturday. According to BBG, next Tuesday or Wednesday is the latest. Reason for delay: health permits, general red tape [EaterWire]

3) China Basin: Last we checked in on the upcoming Burger Joint down by the ballpark, originally slated for Summer 2007, they had pushed back the opening to the holiday season. This past weekend, an Eater tipster actually asked the crew about the delay. Reason for delay: "Work has been slow. City not helping." [EaterWire]

4) Broadway Strip: Speaking of burgers, two weeks ago, Horizon looked days away from debuting, but since then, things have been pretty quiet on the news front. They've had liquor license issues, but things may run deeper. When Eater Staff passed by the other day, the whole interior—or at least the floor—looked to be getting an facelift. Some last minute indecision? Reason for delay: liquor licenses, mysterious interior overhauls [EaterWire]

5) The Mission: Down on Valencia and 18th, next to New Yorker's Buffalo Wings lies Pizzeria, papered and plywooded anew. It looked ready to go weeks ago, but now it appears to have takn a step back into the plywood zone. Anyone know anything? Reason for delay: N/A [EaterWire]

Got some tips on fall openings? Drop 'em in the jar.