There has been plenty of action down on Jessie Street lately, and as they hurtle towards the grand opening, we have a feeling things shan't be slowing down anytime soon. Have some Mint Plaza juice? Lay it on us, would you? 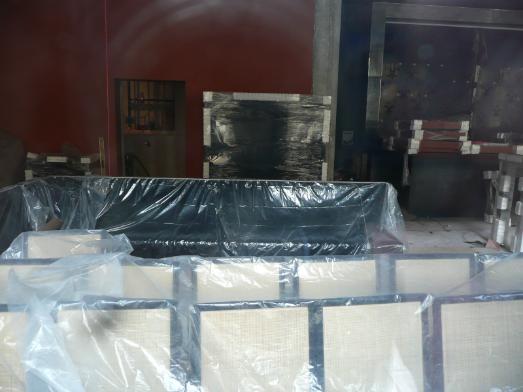 1) As expected, Chez Papa did not open this past weekend. The target date is still the Newsom-led grand opening ceremony on November 16th. They are hoping—hoping!—to have debuted before then. Odds that it's open when Gav cuts the plaza ribbon: 5 to 1. Place your bets!

2) A peek inside the Chez Papa space (above) reveals that an opening within a fortnight just ... might ... be plausible, depending on how the back of house things are going. Some burnt orange paint was spotted in the entryway. The flooring is finally done and the furniture is ready to roll out. But don't worry: there's still plenty of finishing work to be done. 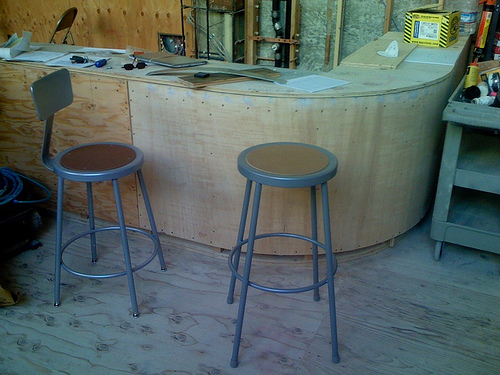 "Stool samples." Which one do you like? [Photo: Flickr/bluebottlemintplaza]

3) Not to toot our own horn, but our prediction that the Blue Bottle Cafe would be the second restaurant to open in Mint Plaza is looking pretty good right about now. From the looks of their Flickr page, things are moving along quite nicely. They've got the wiring and plumbing done, as well as the liquor licenses lined up. Score one for the little guys.

4) You know what's not almost ready? Sushi Groove Dolce Vita. Ever since the bomb dropped last week that Jocelyn Bulow and co. were shifting the focus of patio restaurant to a Tuscan trattoria, rumors of discord have been swirling wild. Interestingly, according to the Mint people, they are "still working" on the lease for the the space. Either way, we've got a feeling that whatever goes into the space is a ways off.

5) Speaking of lease negotiations, Limon remains the best bet to take the open space at 418 Jessie, but they still remain firmly entrenched in the courtship stage. No word on how—if at all—the turmoil next door will affect the happenings here.
· Eater Headhunter: Be Part of the Mint Plaza Glory [~ESF~]
· EaterWire: Sushi Not Happening in Mint Plaza [~ESF~]
· Mint Plaza Extravaganza: The Homestretch (Maybe) [~ESF~]