Share All sharing options for: Week in Reviews: Tinderbox Impresses Yet Again

A vacationing Michael Bauer is doing his best gaucho impression down in Argentina, but there's still plenty of action in today's edition of Week in Reviews. Let's get to it. 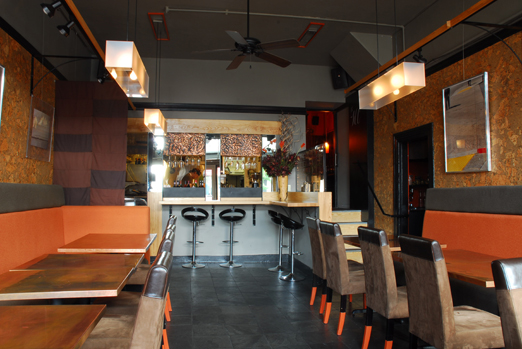 1) For the second consecutive week, one of the weeklies lavishes praise on Bernal Heights gem Tinderbox. This time around, it's Ms. Meredith Brody doing the damage. Despite some initial hiccups, the entrees by Chefs Ryan Russell and Blair Warsham win Brody over:

With the main courses, Tinderbox was back to exciting and inflaming us ... My other friend surprised me by going for the vegetarian option, grilled avocado cutlet, which further surprised me by being almost genius. The very gently warmed avocado boats, filled with carefully turned pea-sized balls of cucumber and set on yellow bell pepper syrup, were delightful, but I found the big round risotto cake it came with rather dull and stodgy despite its advertised filling of Cotija cheese and avocado cream.

Also of note: Brody briefly touches upon the the opening controversy that saw the Tinderbox folks dissuade families/children from dining in the "adult" restaurant, and how in retrospect, local parents have begun to understand the reasoning behind the move. Like the neighborhood itself, another critic is won over by Tinderbox's creative and fun cuisine. [SF Weekly]


2) Josh Sens of SF Mag takes his turn at Farina, and even as a symbol of the changing face of the Mission, a disappointing Farina is just worth two stars:

A splashy-sounding starter called cappon magro is actually a layered, chilled salad, with lobster, halibut, mussels, and shrimp piled atop striations of root vegetables (carrots, beets, potatoes) that mirror the colors of the Italian flag. It looks hokey and sloppy, but the real drawbacks are its muted flavors and mushy texture—this archaeological dish is a dud, no matter how deep you dig.

However, the wine list is a winner and there are plenty of high points on the menu. As for the neighborhood controversy of a splashy, flashy newcomer, well, consider Farina an outgrowth of Mission gentrification rather than a cause of it. [SFM]

3) Paul Reidinger is at Bodhi, the "enchanting" Inner Valencia Vietnamese restaurant in what used to be The Window:

Bodhi, as a culinary experience, isn't the match of a place like Dragonfly, which lifts Vietnamese cooking to a sublime level without doing violence to its basic character. But even the grandest restaurant is never entirely about food; a meal in a restaurant is a holistic interval whose meaning and value turn not merely on what is eaten but on whom it's eaten with and in what setting. In this enveloping sense, Bodhi is unlike any other place I can think of on Valencia Street's ever-longer restaurant row

Reidinger even predicts that if Bodhi's success is any indicator, the developing restaurant row on Valencia could extend all the way to Market. Them's bold words, Paul. [SFBG]

ELSEWHERE in this Bauer-less week, Carol Ness pinch-hits for the Chron and does her East Bay thing at Oakland's Ninna, lavishing a modest two stars on the "somewhat dated" but "still enjoyable" pan-Asian restaurant. Also in the East Bay, the Guardian's Molly Freedenberg checks out the brunch Telegraph's bargain bin Finfiné Ethiopian Restaurant.