Adventures in Shilling: On the Reverse-Shill

Share All sharing options for: Adventures in Shilling: On the Reverse-Shill

Adventures in Shilling is a celebration of the latest, greatest and grossest shills from around the world wide web. Per normal, you too can help fight shills. 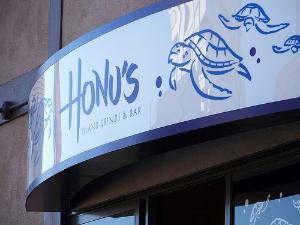 Contrary to popular belief, shills do not only come of the absurdly-positive variety. Indeed, sometimes people—including (dare we say) rival restaurateurs—feel it necessary to denigrate their competition in addition to shilling their own restaurants. Hence, the reverse-shill is born. Let's get to it, shall we?

Up first, we have a dubious review from a first-time reviewer on Yelp (where else?) on the still-unopened Honu's Island Bar and Grill:

But it's not just competing restaurateurs who resort to reverse-shills. Sometimes, local Chowhounds (posting for the first time, mind you) just don't want people flooding new restaurants, because of ... gangs? (Sidenote: CH post coming down in 3 ... 2 ...):

Ellis is one block north of Eddy. New Jazz center is at 1300 Fillmore St.(at Eddy St.)

And then there is the unfortunate case of the Luisa Hanson-Barleycorn feud. Our feelings on the matter are probably clear by now, but Barleycorners have been doing plenty of unnecessary reverse shilling on the Yelp page for Luisa's on Union Street, and Yelp moderators are pretty much doing nothing. An excerpted pick of the litter:

Painful. It was the kind of meal that made a foray into cannibalism a not-all-together unappealing proposition. No window dressing can doll up this culinary sh*thole, no matter how many sycophants (to whom I suspect Luisa Hanson offers a free meal) submit the cloying and sometimes painfully over-optimistic reviews found on this site. Overpriced? Absolutely. Taste? Bland, unless you consider salt lick a flavor ...

The fight against shilling continues. See a shill, share a shill.