All news and notes EaterWire. Have some juice? The tip jar awaits. 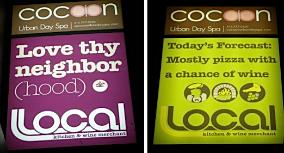 SOMA—In the wake of a false alarm or two, tonight is finally opening night for Local Kitchen & Wine Merchant by Ola Fendert, Mark Bright and crew. Calls to Local have been met with a cheery affirmative that they are indeed open for business right now, but a resy might be tough to come by. Plenty of further details on Local can be had in the Eater Archives, Thrillist and Daily Candy. [EaterWire]

COFFEETOWN—27 years after arrival, John Weaver is leaving his post as the Master Roaster at Peet's Coffee & Tea to start his own business, aptly named Weaver's Coffee & Tea: "Weaver co-founded Wild Card Roasters in September with Michael Brown and Bruce Inouye with hopes of making coffee even more artisanal than Peet's brews. Weaver will personally taste every batch of Weaver's that is produced." He must be totally wired by the end of the day, no? [SFBT]

NAPA—The Oxbow Public Market—Wine Country's version of the Ferry Building—is on tap to debut this weekend. In addition to a seven-day-a-week farmers market and various other vendors, some notable Ferry Building faves will open new branches up north. Among others: "In separate buildings adjacent to the main market will be the Fatted Calf's full-service butcher shop, Model Bakery and a third outlet of St. Helena's ever-popular hamburger stand Taylor's Automatic Refresher." [LA Times, via Eater LA]