Eater Inside: 1300 on Fillmore

Share All sharing options for: Eater Inside: 1300 on Fillmore

A recurring feature brought to you with the help of local photographers, Eater Inside showcases the interior space of high-profile, recently-opened restaurants. 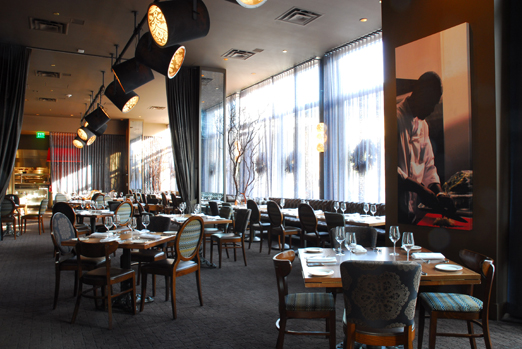 Not to be lost in the shuffle of the Yoshi's madness is the modern southern eatery next door by Chef David Lawrence. Also part of the Fillmore Heritage project but open for a month longer, 1300 probably hearkens back to the bygone Fillmore jazz era even more so than its splashy neighbor. The design by McCartan (Americano, Hotel Adagio) has an sophisticated lounge feel, but incorporates a bevy of old-school photos of the neighborhood and its jazz legends, giving the place a casual undertone to its decidedly upscale slant. The 136-seat dining room dominates the restaurant, but a cocktail lounge is off to the side, along with a bar (serving the full menu) and a private room. We're of the opinion that 1300 seems to be much more accessible than Yoshi's, but with weekend reservations already reaching the "6 or 9:30?" point, expect to see even more growth on the corner of Fillmore and Eddy. Also en route: live music and brunch and lunch offerings.