ShutterWire: Soluna to Close in January

Share All sharing options for: ShutterWire: Soluna to Close in January

All restaurant and bar closings around town are reported regularly via The Shutter. All breaking news and general notes go in EaterWire. Put them together and you get a rare edition of ShutterWire. 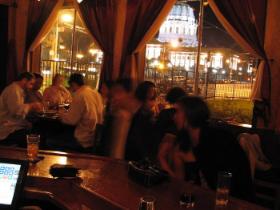 CIVIC CENTER—Just a half block from City Hall, Soluna Cafe and Lounge has been sold and will be closing come January. The New American restaurant has been a fairly popular choice during lunchtime for Civic Center people, as well as a solid pre-theatre option. Escrow is expected to close in early '08, but the Soluna folks say that the new owner is hoping to undergo a seamless transition. The name will almost certainly change and if all goes to plan, the space at 272 McAllister won't experience an extended closure. Rather, there will just be slow changes as the business changes hands. No word on whether or not the lounge's shuttering has anything to do with the, ahem, newfound sobriety in and around City Hall (we kid, we kid). [ShutterWire]