Share All sharing options for: Eater Exclusive: An Early Look at Haight's Uva

Uva Enoteca won't be arriving until late spring 2007 (March/April is the preliminary aim), but we couldn't resist the opportunity to go beyond the bunnies—since replaced by butterflies, FYI—and take a look inside. Since the former occupant abandoned the 568 Haight Street space following a fire some years ago, Batali-vet Boris Nemchenok and Dining Room at the Ritz-vet Ben Hetzel have the opportunity to build their little Italian enoteca/wine bar from scratch.

Once inside, a banquette seating area greets you, followed by a ten-seat bar to be topped off with Italian marble. A dining room and open kitchen lie just past the bar, towards the rear, making about 49 seats total. Cheese and meats will be prominent, both on the menu and literally in a display case adjacent to the kitchen. The wine list will most likely kick off with 75-100 offerings, but the guys expect that number to grow closer to 250 eventually. As you should be able to tell from the pics, the space will be pretty intimate (think NYC's 'ino and 'inoteca). Fun sidenote: all the wooden tables and banquets are being custom-built on-site. An opposite view follows: 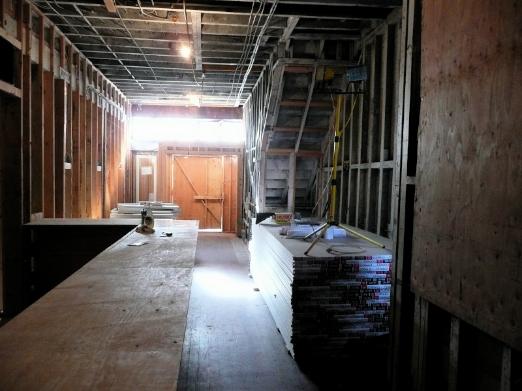 The view facing Haight Street. Bar to the left, banquette seating between the bar and the door. Do you feel the neighborhood snugness?
· Fun With Red Tape: Uva Finally Gets Go-Ahead [~ESF~]