Administrative note: this post was compiled in full via the wonderful Mint Plaza free wireless. You haven't lived until a guy comes up and asks you for "a nickel or some Cheese Doodles" in the middle of a post. 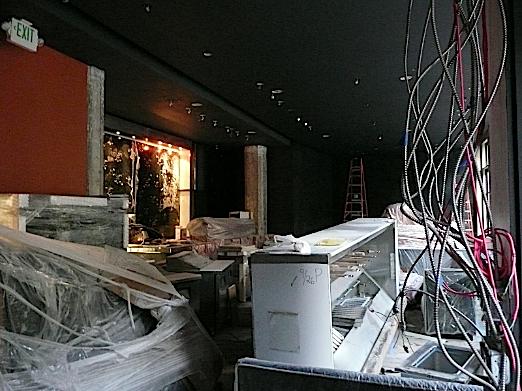 It's been quite some time since we've poked our nose around Mint Plaza, mostly because news has been pretty slow down on Jessie Street. Ever since the grand opening ceremonies in mid-November—which really didn't change a thing here, btw—it seems that the pedestrian plaza and its upcoming quartet of eateries have slipped out of the consciousness of the public. Given the state of affairs in Mint Plaza, that might be a good thing for everyone involved. Here are the happenings:

1) The delays at Chez Papa continue to take place per normal. After the Jocelyn Bulow brigade failed to make the November 16th opening date, lots of heavy-duty work continues in the back of the restaurant. As seen in the above photo, all furniture and fixtures (including the bar) have been piled under wraps in the dining room; paint is up only in the main room. Compare/contrast with the more polished appearance last month. 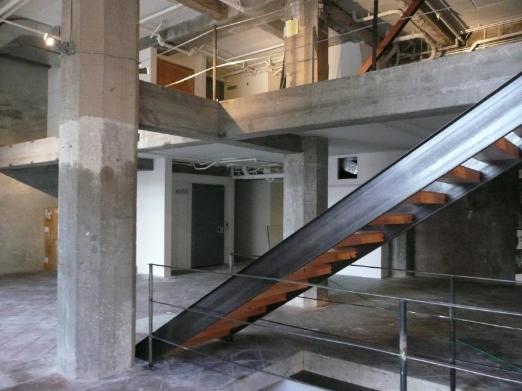 2) After a flurry of work leading up the Thanksgiving break, work has finally gone on pause at the above space, still unclaimed. Limon continues to be in negotiations, and the only other restaurant rumored to be taking the space, Dosa, has apparently found a spot near Fillmore (more on that later). We're on record as saying this is the best space in the plaza, and now that the work debris has been cleared, the proclamation stands.

3) If Chez Papa isn't the biggest, most mysterious mess down here, then the Sushi Groove/Dolce Vita space most certainly is. You'll recall that Chez Papa's Bulow was reported to have an Italian trattoria in his sights, but some Mint folks are apparently very married to the sushi idea and are still trying to make it happen. Lease negotiations are ongoing.

4) It's 4:15 and workers just swiped all the orange chairs. In other words, darkness—and the super rats—are approaching.

5) As usual, the Blue Bottle Cafe guys—technically separate from the Mint building—continue to make the most progress. An early January opening is still the aim, but even more interesting is the very real possibility that Blue Bottle Cafe could be the first restaurant open in Mint Plaza. Further reading and plywood shots can be seen in Fall Tracking and on Blue Bottle's official Flickr page. That hardwood floor is quite dandy.
· Mint Plaza Extravaganza: Tomorrow's the Day! (But Not For Chez Papa) [~ESF~]
· Mint Plaza Update: T-Minus Two Weeks [~ESF~]

As always, your Mint Plaza sightings, tips and rumors are much appreciated. Continue to send them over to the tip line.