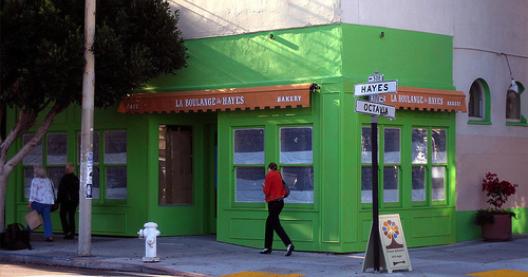 A Very Green Branch of the La Boulange Family Tree. [Photo by courtneyp]

UNION SQUARE—The upcoming restaurant within the friendly confines of the Mark Twain Hotel has changed its named from Two Fathoms to Fish & Farm. The official site bills itself as specializing in "New American Seafood and Artisan Meats." Late September remains the opening date. [PLYWOOD]

NORTH BEACH—A hofbrau grows in North Beach. La Trappe Cafe and Bistro is slated to open at 800 Greenwich. Anticipated on the menu are Continental pub grub and "Belgian- and Trappist-style suds." Given La Trappe's beer-centricism and its super-fratty slogan, it should have no trouble fitting into the neighborhood. [Zagat Buzz]

HAYES VALLEY—October 1st remains the date for the seventh outpost (by our count) of the La Boulange mini-empire. La Boulange de Hayes will be on the corner of Hayes and Octavia. As seen from the above Flickr photo, bright colors shall be involved. [PLYWOOD]

MORE NORTH BEACH—Fro-yo wars! Fro-yo wars! The latest entry: the windows of space on the corner of Grant and Green are still taped up with Honeydoo logos, despite early reports that it would be open by the end of summer. [PLYWOOD]

LOWER HAIGHT—According to an entirely honest and impartial Yelper named Husain who has left a single review ever, Baghdad 1001 Nights will be open by the first of the month: "hi to all. a im sure you gana love this restaurant called baghdad nights on 682 haight st very good food they do iraqi bread they make it when you order it. they will open for sure on 10/1/2007 you can call this number for they restauarnt 415 862 6111.." And yes, the fall season of Adventures in Shilling is going to be glorious. [Yelp]