(A Bauer-Less) Week in Reviews: Two-Faced Ducca Shines in More Ways Than One

Share All sharing options for: (A Bauer-Less) Week in Reviews: Two-Faced Ducca Shines in More Ways Than One 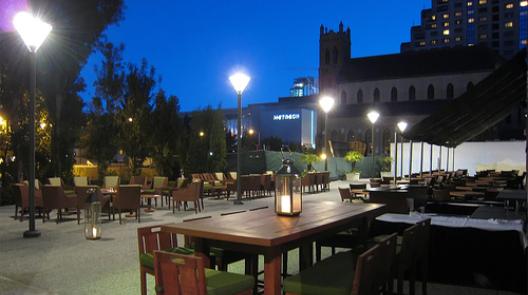 Despite a second consecutive review date without Michael Bauer, our hearts must go on. This week, Meredith Brody files in on the new and trendy Ducca while Paul Reidinger revisits an old pal in the form of Destino. Plus, the Chron staff fills in admirably and much, much more. Get excited.

1) SF Weekly's Meredith Brody takes her turn at Ducca, the ritzy downtown Venetian eatery. Ducca, still glowing from an excellent three-star review in the Chronicle a mere two weeks ago, puts on a bit of a Jekyll-and-Hyde show for Brody: daytime lunch evokes dreamy decadence:

By this time we were feeling pretty heady, too, not so much from wine, but from the exceedingly beautiful and calm surroundings. Even though a slender spire towered over us, the spacious patio, lined with a row of graceful Lombardy poplars that swayed in the gentle breeze, seemed as if it were somehow separate from the city, in another place, and that place could have been Italy. The day, which had started like any other, was unexpectedly improved.

However, Brody's return after-dark revealed another Ducca entirely, rife with "noisy celebrants," "noisy music," and a host of other "mildly unpleasant distraction(s)." In all fairness, Brody is quick to point out that the nighttime Ducca is still marvelous; it's just a radical shift from the escapist lunch experience. Most importantly, she echoes others' sentiments in that the "lovely" food never wavers at all. [SF Weekly]


2) Paul Reidinger and the Bay Guardian revisit one of the more established Peruvian/Nuevo Latino destinations in town: the seven-year-old Destino. From the moment he enters James Schenk's restaurant, the stability and familiarity of Destino is quickly confused for apathy and dullness:

Once safely inside Destino, the walker will find the restaurant's look barely altered from its early days. The color scheme is still golden-ruddy, with shades of copper and umber on textured walls, one of which continues to be hung with three large, ornately framed mirrors. The keepers of the bar just inside the front door are young and rakishly handsome; apart from their black garb, they're scarcely distinguishable from the clientele, whose clothes are tepidly polychromatic in that rich-hipster way, with plenty of untucked, close-fitting shirts in pale blues and grays and many, many fancified versions of those Italian bicycle shoes. Would someone please turn the page? How about a designer version of ski boots, in two-tone Italian calfskin?

In the end, the fare mirrors the atmosphere: nice enough, but thoroughly unremarkable. In Reidinger's eyes, the gold standard for Peruvian (emphatically) remains Mochica. Ouch. When a critic drops the competition's name in your review, you know it's time for a facelife, Destino. [SFBG]

3) The Tablehopper hops along to the Tenderloin, where Sudachi reigns supreme in all things sushi-related:

But, if I was in the Lower Polk and craving some sushi, I would totally plunk myself down at the sushi bar here.

The sushi we tried, like hotategai/scallop ($4.50) and saba/mackerel ($4), were all cut well and fresh. Exceedingly so. Ditto on the toro. The head sushi chef, Tadashi Maki (great name, no?), has something like 24 years under his belt, and it shows. Now that the taste test is done, I’d like to explore the sushi menu more here.

There's even a happy hour on weekdays; it looks like the folks behind Sudachi are trying to create a "youthful, artistic vibe." The location is a bit troubling though. [TH]

Elsewhere, the Chron staffers pick up the Bauer slack in the greater Bay Area, with a decidedly Italian slant: Karola Saekel heading to Lafayette's La Finestra and Miriam Morgan checking out Berkeley's Venezia. Aleta Watson has 3.5 stars for Marché in Menlo Park, while Vinography shrugs off hints of pretension at Pres A Vi and enjoys the reasonably-priced, wide-ranging wines.