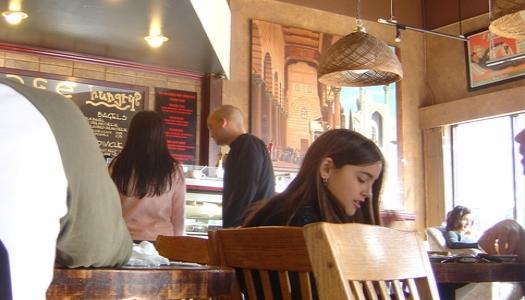 NOPA—At long last, Cafe Abir has reopened. The remodeling has given the onetime divey coffeehouse a more "plain" look which, depending on your sensibilities, may or may not be a good thing. Either way, those rundown couches are history. [NFT]

UNION SQUARE—Every month, Millennium puts on a five-course aphrodisiac dinner on the Sunday closest to the full moon. This month's affair is next Sunday, September 30. If it's sold out (a strong possibility), you might try to get tickets to the October 28th event. More details on the official site. [EaterWire Inbox]

POTRERO HILL—Preliminary reports from the new Whole Foods continue to trickle in. Everything seems normal enough for a Whole Foods (read: lofty prices, organic things) but to the average eye, the much-touted spa services and cafe are nowhere to be found. [EaterWire, CH]

FILLMORE—Morrissey is playing The Fillmore this Sunday and the following Monday. And he's banned meat from the premises. Start your jerky-smuggling engines. [SFist]

THE MISSION—Attention "foodies"! Mark your calendars: October 6th marks the first screening of Eat at Bill's: Life in the Monterey Market. The documentary about Bill Fujimoto, the owner of Berkeley's famous Monterey Market, and how he ushered the era of supporting your local farmer. The screening, part of the SF Indie Fest, will take place at the Roxie Film Center on Valencia and 16th. [EaterWire Inbox]

EAST BAY—The latest proposal for the A's new Fremont ballpark includes plans for a mall next door that would feature "high-end retail stores, restaurants overlooking the outfield, and housing for at least 3,000 people." [Chron]