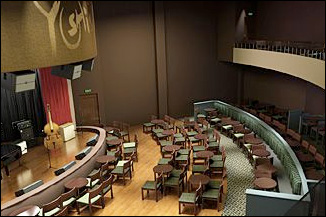 Big news from the 1300 block of Fillmore! It seems that the city's (slowly fading?) jazz corridor will receive a massive boost in late fall. On November 28, nationally-renowned Oakland jazz club Yoshi's will debut a second venue on Fillmore Street. Artist renderings of the exterior and interior are available on Yoshi's minimalist SF website, but those who attended the press conference on Tuesday are already dishing out the juicy details on the expansion of the most well-respected jazz club on the West Coast.

Designed by Morimoto, Matano & Kang Architects, the room is still essentially a skeleton at this point, all concrete and bare steel. But elegant contours are clearly visible, and some already-painted areas reveal a palette of welcoming earth tones. The restaurant area will eventually seat 370 between a main floor and a balcony lounge, with private banquet rooms and a traditional tatami room off to the sides. Executive Chef Shotaro Kamio, pointing to a vast kitchen area, promised a menu that would go well beyond sushi to incorporate the full range of contemporary Japanese cuisine.

But that's not all: also moving in the business cluster on 1300 Fillmore will be a French soul-food restaurant, simply named "1300" in some places but dubbed "Blue Mirror" in others. The Eater investigative staff is on the name discrepancy.
· New Yoshi’s Promises Big Names, Elegant Setting [FOJAZZ]