Week in Reviews: Bauer Finally Chimes in on Farina

Share All sharing options for: Week in Reviews: Bauer Finally Chimes in on Farina

For all intents and purposes, this is Michael Bauer's town. Sundays are usually his turn to chime in on the recently-opened trendsetters in the town. Every Monday, we'll recap the weekend carnage. This week, he takes on a doozy in Farina. 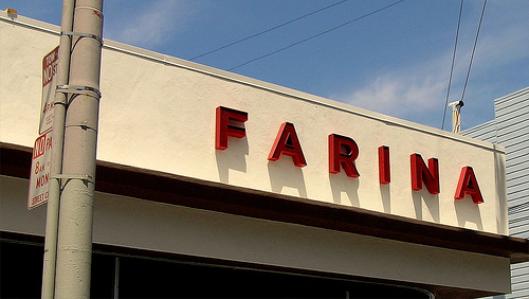 Take special note of the No Parking signs. [Photo: sean94110]

After a little time off, Michael Bauer returns in glory this week, taking his long-awaited turn at Farina, the splashy, controversial Italian newcomer on the developing 18th Street restaurant row. Bauer's 2.5-star review is pretty much the latest in the long line of subpar Farina reviews, and he echoes many of the sentiments heard in previous reviews: impressive design, nice people but forgettable fare:

I applaud the simplicity and artistry implicit in the food, which has a pure Italian pedigree, thanks to owners Laura Garrone, Luca Minna, Brett Terpeluk and Monica Viarengo. The partners' goal was to bring a true Genovese focacceria to San Francisco, so they hired chef Paolo Laboa from Genoa. While I appreciate this attempt at purity - there are too many generic Italian restaurants and too few truly good regional places in San Francisco - I'm slightly disappointed after my four visits.

Bauer rattles off a list of significant food issues, from "mushy" potatoes to past-its-prime seafood. Even worse for the Farina folks, he makes special note of the restaurant's two other (significant) hurdles: its ongoing neighborhood controversy and its inevitable, perpetual second-place finishes to Delfina. At the very least, Farina's the restaurant generating the most buzz in the city. For now. [Chron]