Share All sharing options for: EaterWire: Now With More Keller! 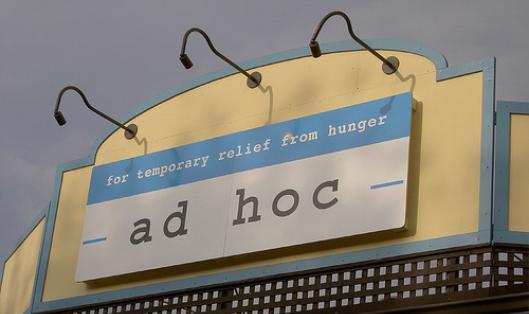 A pair of EaterWire items from the weekend that was ...

WINE COUNTRY—In honor of its first anniversary, Thomas Keller's casual gem Ad Hoc will now be open for dinner seven nights a week. Originally slated to be a temporary restaurant, Ad Hoc's runaway popularity has made it a Yountville mainstay. Dinner will now be served from 5pm to 9pm Monday through Saturday, and from 3pm to 8pm for Sunday supper. [Napa Valley Register]

BONUS WINE COUNTRY—Seems like everyone's expanding hours up in Napa: Ubuntu will add on breakfast and lunch to its dinner service. Chef Jeremy Fox's lunch menu will bear strong similarities to his successful dinner menu, including the famous ratatouille on zucchini bread with burrata and basil. It's quite the expansion for the area's only vegetarian restaurant and combined yoga studio. [EaterWire Inbox, NVR]