Share All sharing options for: Week in Reviews: Tajine, Pauline's Pizza and MORE

Welcome to the latest installment of the Week in Reviews. This week, Tara Duggan takes the Chronicle reins as she rediscovers Tajine. Meanwhile, the weeklies kill several birds with their respective stones, with Paul Reidinger taking a tour of new Hayes Valley spots and Robert Lauriston exploring a pair of (very different) California pizza mainstays. 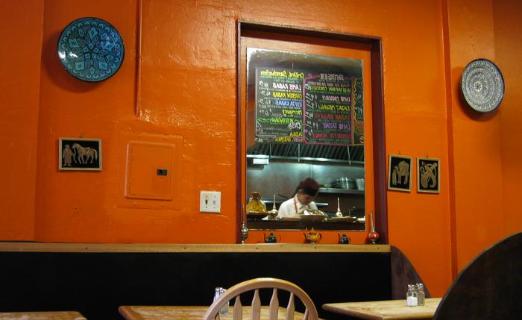 1) Tara Duggan pinch-hits for Senor Bauer at the Chronicle's Wednesday update, revisiting an old fave in Tajine. Since creating a sensation upon opening in 2005, the Turkish BYOB-spot has moved into a bigger space with higher prices, but the charm persists:

We also started out with the vegetarian b'steeya ($8.95), a riff on one of the specialties of the house, chicken b'steeya ($10.95), a traditional layered pastry. As on a previous visit by The Chronicle, the overall effect was too sweet for an appetizer, what with the cinnamon-scented carrot, almond and raisin filling and a liberal dusting of powdered sugar atop the flaky phyllo. That's not to say it wasn't succulent and delicious, especially with coffee the next morning.

All in all, it's the nice story of a gem that remains pretty and shiny upon discovery: two stars for Tajine. [Chron]

Bottom line, CPK is like Starbucks or Quizno's. If you're stuck in some culinarily deprived place with nothing but restaurant chains, you'd be lucky to find one. Here in S.F., there are better choices. For example, Pauline's, which has been making the best California pizza in the city since 1985.

The highlight at Pauline's? Pesto pizza that "demands a visit." [SF Weekly]

What is it about dressed-up Mexican restaurants? No matter how elevated their intentions, they often wind up feeling like elaborate delivery systems for alcohol: Rube Goldberg machines for the residents of Margaritaville. This is true of Tres Agaves, the tequila pumping station a few blocks from the ballpark. And it holds, though to a lesser extent, at Mexico DF just off the Embarcadero, where chips and salt-rimmed cocktails distract you from the fact that the carnitas cost 26 bucks.

Perhaps this will quell the upscale Mexican trend?

Elsewhere, Paul Reidinger of the Guardian does something of a tour-de-force at Hayes Valley, hitting up two neighborhood newcomers: Stacks and Hayes and Kebab, "Check, Please!" checked out Sociale this weekend, and outside the city, the Chron's Mandy Erickson also bestows a pair of stars to San Carlos' Spasso, while the Merc's Aleta Watson gets her "robust" Turkish on at Campbell's Cafe Artemis.