A brand-new Whole Foods opened yesterday with much ado in Napa, marking the 25th branch of the market in the state, and the first one up in Napa. Earlier in the week, we put out a call for eyewitness accounts, and commenter Napavore was kind enough to brave the chaos and report back from the opening extravaganza. His words follow:

The morning started at 8:45 am with fanfare from the high school marching band, released doves soaring poetically in loops and then off to the distance, gourmet foods on little trays, chefs in white ... and crowds of people.

The grand opening of Whole Foods was both big news for Napa and at the same time anti-climactic. While their store, the foods, and the produce are beautiful and clean, it's basically a normal gorgeous Whole Foods, which also means not cheap, especially compared to Trader Joe's next door. Some nice additions were the culinary center (which offers cooking classes and knife skills and other demos), a wine bar (pictured above), cheese bar and walk-up window for coffees and pastries. 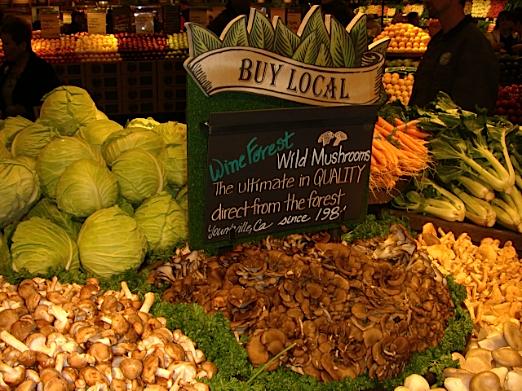 The samples offered were standard (yet delicious) fare: beverages, cheeses and sliced (organic, of course) pears. Some paused at the floodgates to get a tuft of bread from Napa's Mayor Techel who was quickly tearing and handing out pieces from a long braid loaf at one of the large ceiling-to-floor glass entrances.

Other than having to fight a pilates clothed soccer mom for a brownie bite (from Yountville's Bouchon Bakery, no less) the glowing excitement was tarnished by the lack of parking and the horrible traffic situation in and around the now packed Bel-Aire Plaza, which wasn't helped even with the flag wavers at the intersection.

Between walking from the other side of the center where I had to park, walking around the huge market and the energy I spent wrestling the crowds for (another) Bouchon Brownie Bite, at least I can say I got my exercise.
· Napa Dispatch: Whole Foods Opens Tomorrow [~ESF~]