1) 66 Mint Street: Brace, San Francisco: the opening of the Blue Bottle Cafe is less than a week away, as the guys down there say that a Wednesday opening is a strong possibility. Next week will bring further updates, but it would appear that Blue Bottle will be the first opening at Mint Plaza. The front door (above) is newly-installed, and the interior space can be seen their Flickr page. There will be two menus—night and day—that will change on a weekly basis, though they will more or less stay static at the onset. Sunday brunch will see French press service. We've seen the food menus, and they seem rather glorious and nothing short of the hotness expected from Blue Bottle. Be very excited. 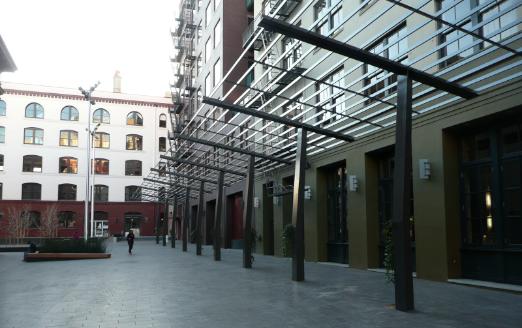 2) 414 Jessie Street: Also nearing completion is Chez Papa, which is now looking at an early February debut. The first weekend of February is the earliest date being thrown around, but according to sources, the first fortnight of the month should "almost certainly" see an opening. The "New York-style" interior is decked out in an orange and black color scheme—go Giants—and the dining room decor should be complete by next week. Outdoor dining is also expected; about 80 seats will be placed underneath the trellis overhang (above).

3) 54 Mint Street: Over at the space with the patio, the sushi concept is officially out, and some uncertainty, the Italian trattoria dubbed Dolce Vita is officially in. Projected opening date is currently late spring/early summer.

4) 418 Jessie Street: The sole unclaimed territory may not remain as such for much longer, as negotiations with that still-unnamed restaurant are reportedly "going forward" Limon has long been rumored to be interested in the space, you'll recall.
· Plywood Report Mint Edition: Chez Papa Interior Revealed! [~ESF~]
· Return to Mint Plaza: Three Weeks Post-"Opening" [~ESF~]