Technical difficulties got the best of us today, but have no fear, we'll be back tomorrow with a full slate of goodness. In the meantime, please feel free to submit your news, sightings and gossip to the Eater tipline. 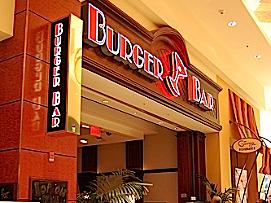 UNION SQUARE—An interview with Hubert Keller (of Fleur de Lys et al.) reveals some murky details regarding his next project, a San Francisco-based version of his Las Vegas hit (pictured), Burger Bar. When asked of his future plans, here's what Keller had to say: "Right now, we concentrate [on the St. Louis opening]. Next year, we will open in San Francisco with our first free-stander, probably near Union Square." Let the speculation on the space begin ... now. [St. Louis Mag]

CITY-WIDE—Even though a federal judge sided with the Golden Gate Restaurant Association last week against the proposal, the city's groundbreaking health care reform law went into effect today, despite the GGRA's best efforts: "The Golden Gate Restaurant Association ... told the court in written arguments Monday that the city was trying to sidestep the appeal process by seeking an emergency order to implement a law that has been ruled invalid ... The association, which has more than 900 members, has proposed that the city find another way of financing an expanded health program, such as a quarter-cent local sales tax." [Chron]

LAFAYETTE—One of the East Bay's best newcomers of '07, Metro Lafayette, has lost the superstar chef that put it on the map. Naturally, money is at the root of the tabloid-esque dispute: "A week before Christmas, executive chef Mark Lusardi called it quits, claiming [owner Jack] Moore had failed to honor a crucial promise regarding pay. Moore's now left with an eatery that sold itself primarily on Lusardi's talents, and which designed itself around the 46-year-old Berkeley chef who'd helped turn previous ventures golden—namely Pearl in Rockridge and Roxanne's in Larkspur." [Oakland Tribune]