This is First Word, wherein Eater and/or its correspondents sit for hours at steamy community board meetings to bring back the first word of new establishments and the like. Today, a very special recap of last week's Yountville city council meeting. 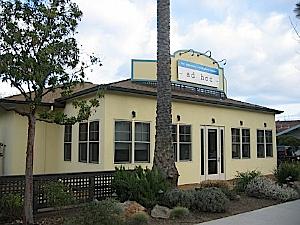 A pair of big ticket items were on the Yountville Town Council agenda last week: Thomas Keller's new restaurant and Michael Chiarello's resto/retail project. Keller's Burgers and Half-Bottles concept was approved by a three to one margin, leading us to wonder who exactly votes against Food Jesus. The conditions and details are as follows: 19 counter seats, take-out service, 1335 square feet and a shared kitchen with Ad Hoc, though there will be two separate entrances for the restaurants. According to our man on the scene, Keller isn't exactly thrilled about the small size of the space, but there weren't any other options in the area. In any event, Thomas Keller take-out service is officially en route.

Also making an appearance on the scene was Michael Chiarello, who spoke about his own Yountville project, which was revealed some time ago. At the mic, Chiarello outlined his plans for his restaurant and retail store in the 4200 square foot V Marketplace space. Our favorite quote from the scene's recap involves Chiarello explaining the concept by quoting directly from his press release: "He said his new restaurant will embody his steadfast love of rustic flavors and sustainable living through a memorable and quintessentially Napa dining experience (who uses words like that?!)." Also of note: the complex will feature a demonstration kitchen that can be used for hosting special events (80+ people) and as a set for the filming of video segments to be aired online.
· KellerWire: Details on the Burger Project and MORE! [~ESF~]
· BREAKING: Michael Chiarello Opening Yountville Resto [~ESF~]
· More on Michael Chiarello's Yountville Endeavor [~ESF~]